Odd Future Wolf Gang Kill Them All The OF Tape Vol. 2 Review

This is being trumpeted as Odd Future’s first release ‘proper’, and certainly it’s their first since achieving global notoriety at the start of last year, roughly around the time mainman Tyler, the Creator made a startling black-and-white video to go with his single Yonkers. But this is by no means their debut: there have been upwards of a dozen free-to-download albums released over the last few years, many of them ranking with the best music made in the name of hip hop, particularly Tyler’s Bastard and Earl by the group’s totemic 11th member, Earl Sweatshirt. Said pair unveiled OF’s trademarks: brutally unpleasant lyrics set to music that was by turns bludgeoning and beautiful, a near-relative of chillwave, of which Tyler is a big fan.

The OF Tape Vol 2 is up against it from the start: up against all those albums and all the press and blog blather that’s resulted from the group’s provocative lyrics. OF are basically in the position the Sex Pistols were after Never Mind the Bollocks – and last anyone heard, they didn’t manage a follow-up at all, let alone 12 precursors.

Judged in this light, The OF Tape Vol 2 is an excellent addition to the group’s canon, which despite Tyler’s pronouncements to the contrary matters to this crew, who it would be foolish to dismiss as mere feral skatekids. Tyler and Left Brain’s skills as producers are peerless, even if their N*E*R*D adoration (to match their Waka Flocka Flame worship) reaches new heights on tracks such as Analog 2 and Ya Know, luscious funk muzak so breezily pretty you can’t believe they’re not Pharrell Williams covers, equal parts sick and slick. The former features a disclaimer from Tyler – "B*****s think I’m crazy / It’s just so I don’t bore you to death" – reminding listeners not to underestimate the self-lacerating aspect of his art, just in case you thought this was another misogynist's charter masquerading as a slow jam.

Lean is slow, spacey, electronic, Hodgy Beats all over it as he is much of this album. He’s a catalytic figure perhaps, but not the greatest rapper in OF, lacking the charisma of Tyler and Earl. Doms has a beat worthy of Clipse’s epochal (Neptunes-produced) Grindin’, and is puerile but ingeniously so, while Sam (Is Dead) cements their reputation for the murderously mellifluous and Rella goes some way towards recreating the impact of their early avant-rap.

If that wasn’t eclectic enough, enter Frank Ocean. OF’s in-house RnB superstar-in-waiting appears on White, a straight-up Stevie Wonder-style ballad, as though he’s wandered into the wrong session. And in case you wondered what happened to Earl, he makes a cameo on 10-minute closer Oldie, which incidentally is accompanied by a video wherein OF goof around in photographer Terry Richardson’s studio. And it’s a thrill to see the Wolf Gang in all their juvenile glory, and a reminder of how young they still are.

Is it possible to repeat the shock of first hearing, and hearing about, OF? Probably not. But they’re in a better place than the Pistols were by album two. 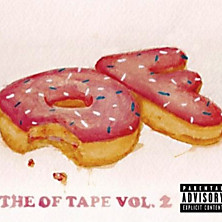