Huge of impact, the NZSO musters tension and foreboding.

In 2008 the New Zealand Symphony Orchestra released a delicious recording of orchestral odds-and-ends by Sibelius that was so good it had many of us clamouring for more.

And more we got. Last autumn the orchestra released the first disc in a Sibelius symphony cycle, again under its Finnish Music Director Pietari Inkinen. They began with the First and Third Symphonies, and the results were a let-down. Where was the fine articulation, the deft pacing and the lucid clarity we’d heard before?

Well wherever they got to, they’re back. Here the NZSO is at the heart of Sibelius’s symphonic oeuvre with the chilling Fourth – spawned at the height of the composer’s battle with alcohol and debt – and the searing Fifth – inspired by Sibelius’ glimpsing of a flock of swans soaring upwards over Lake Järvenpää. No two of Sibelius’s symphonic neighbours pose as striking a contrast as these.

In the former, the NZSO musters rare tension and foreboding. Inkinen isn’t afraid to let the music’s silences breathe, and he finds a steely clarity – notably in the hand-stopped horns and vibrato-less clarinet – that’s perfect for this eerie musical line-drawing.

The playing isn’t as beautiful or imposing as that of Colin Davis’ LSO recording, but it’s more moody. Until, that is, Inkinen weakens the impact of the five disorientating mezzo-forte chords that end the piece by warming them up in an enforced rallentando. It feels like we’ve suddenly escaped the mists.

That’s a shame, particularly when the Fifth symphony can provide its own relief from such desolation. In that piece Inkinen pivots the opening movement on the appearance of the legato trumpet theme; there’s extraordinary cumulative tension before it and an intricate ‘working down’ after it.

Sometimes you don’t experience the counterpoints like you do with Davis and others, as when the orchestra folds outwards in contrary motion against itself. But structurally it has huge impact. In the finale there are no surprises, just the right control of tempi and volume to give maximum effect at the dropping away of Sibelius’ pedal-note ‘runway’ and the majestic upward flight of his swans.

So, bring on the remaining symphonies. But could we please have a Kiwi Lemminkäinen, too? That’s the piece most suited to this orchestra’s cute filigree detailing. If his band can retain this form, I have a feeling Inkinen would nail it. 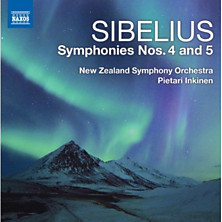