The best world music/ethnic release of the year is also one of the best across all the...

The first few bars of Savane come grinding out of the speakers and plough into your mind like the opening of Jimi Hendrix’s “Are You Experienced?” Cool and shambolic, the guitar spirals into the soundtrack for a griot’s trance. Hendrix would have loved the late Farka Toure’s sound, and he’d have been attuned to its bluesy roots – or should we say its roots of the blues.

This is the music of Mali, the desert homeland of Farka Toure and his band, but it’s a traveller’s music too; open to influences, tracing its own heritage along the Mississippi. If the guitar is one key prop to this sublime fusing of African and West Western styles, the other is the ngoni or traditional Malian lute. It does the job of a both a drunken drummer and a slide guitarist, providing the plucking heartbeat of each song but also evoking a hangdog, laidback mood.

The title track has the empty spaces of dub reggae, with two soulful ngonis weaving through Farka Toure’s emotional narrative about leaving his country, leaving his savannah. The sleevenotes contain translations, and they are worth checking out; Farka Toure has always said his music is only a vehicle for the stories he has to tell – about his ancestors, about the land and, above all, about work. There, of course, is the link: blues is born out of tribal memories, evolves through slave songs, and comes home here, finding itself after a long, tragic circle of a journey to America. Farka Toure’s death in March 2006 was a great loss to music but with Savane he leaves behind a masterpiece and a lesson in attitude – in the sense of outlook and in the sense of character. The best world music/ethnic release of the year is also one of the best across all the genres. 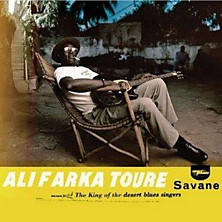