The Bouncer "is totally not a security guy," says Cedar Walton, the venerable 77-year-old Texan jazz-pianist who’s played beside John Coltrane, Max Roach and Art Blakey. This latest documentation of his art opens with a title-track that’s spirited and, yes, bounces along with a bright, airily optimistic swagger, rippling with ebullient horns. This is how Walton's using the term, and his description remains apt for the entire disc.

The core team is a piano trio, with Walton joined by bassist David Williams and drummer Willie Jones III. Saxophonist and flautist Vincent Herring makes it a quartet on five out of the eight cuts, and there are less-frequent guest spots for trombonist Steve Turre and percussionist Ray Mantilla. Walton is an adopted New Yorker, and this album was recorded across the water in New Jersey, at Rudy Van Gelder's famed Englewood Cliffs studio.

The invigorating opener relaxes into Lament, which was penned by trombonist J.J. Johnson, in whose band Walton was a fixture in the late 1950s. It’s a slowie, with brushes slithering across snare, licking at cymbals, as Walton's melodic flamboyance manifests itself in delicately flowery fashion. Aside from this and a lone piece by bassman Williams, all of the rest are Walton originals, whether old or new.

The pace quickens during Bell for Bags; then recent composition Halo features Herring on flute, waltzing along gently with more skippy brushes on the drums. The fullest line-up gathers around Underground Memoirs, with percussion and both horns slinking through Latin terrain, Turre delivering a talkatively muted solo. It comes as little surprise that Willie’s Groove highlights a Jones drum solo, but not before Williams gets a shot on the bass. The latter player brings Trinidadian roots to the fore during his Got to Get to the Island, with Herring’s tenor burst pushing towards the passionate, Walton getting funky for his own solo. The disc closes out with Martha's Prize. "Martha's my wife. I'm the prize!" chuckles the composer.

Ultimately, this album isn't going to burn any bold new paths in jazz, but it’s a soulful summation made in the still-glowing twilight of an old-faithful’s career. 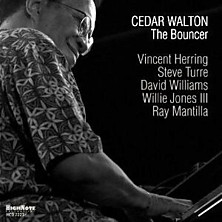