Art of Noise (Who’s Afraid Of?) The Art of Noise! (Collector’s Edition) Review

There’s a telling moment during the bonus material included on this long-overdue reissue of Art of Noise’s 1984 debut where, interviewed by the BBC’s Richard Skinner during a live session, Paul Morley, the band’s director, advises his colleague Anne Dudley: "Don’t tell the truth!"

Art of Noise were all about mystery: the five-piece, normally photographed behind masks, were formed as an ‘abstract’ group by ZTT masterminds Trevor Horn and journalist Morley (credited as playing "paper") alongside ZTT studio mainstays Anne Dudley, JJ Jeczalik and Gary Langan. Their music was essentially a collection of sound collages built from samples processed by the brand new Fairlight synthesiser, including such diverse sources as Horn’s former band Yes and recordings of a car engine. The artwork they employed – the ZTT aesthetic taken to its extreme – was also deliberately bewildering, with, for example, lyrics included for what is essentially an album of instrumentals. With Art of Noise, you see, the magic wasn’t in who made the music, or how they did it: the magic was in the not knowing.

Remarkably, this debut was accessible enough to spawn hit singles, including Close (To the Edit) – arguably the only record ever to include the sound of a VW Golf stalling as its central motif – and Moments in Love, soon afterwards employed by Madonna for her wedding to Sean Penn. Both still sound remarkable: the synth tones may be overly familiar, but the bravado of Close (To the Edit) remains intact, as does the strange allure of its disembodied vocal samples; and Moments in Love – in all its 10-minute splendour – may be one of the most romantic tracks of the 1980s (rather than, as Morley describes it, "the sex song of the 20th century").

Beat Box, too, had proven influential in the development of hip hop when released in its original form a year earlier, but elsewhere Who’s Afraid… was a fascinating but dizzying rush of ideas and noises adorning a largely familiar pop framework, a smuggling of avant-garde ideas and technology into the mainstream. Richard Skinner’s enthusiastic questioning underlines just how inventive it was for the times, and one can only wonder what contemporary pop-pickers, lured into Art of Noise’s world, can have made of the frenzied cut-and-paste of the title-track or the deeply atmospheric How to Kill, built around little more than sound effects and a voice repeatedly intoning "It’s stopped". A bonus DVD confirms the brazen attempts at disorientation extended beyond the records themselves, with different versions of promotional videos, Morley’s attempt at a live performance to compensate for Dudley, Jeczalik, and Langan’s departure from the ‘band’ two weeks earlier, and Kenneth Williams providing voiceovers for TV advertisements. It’s provocative and playful, even a quarter of a century later. After all, who needs truth when you have the Art of Noise? 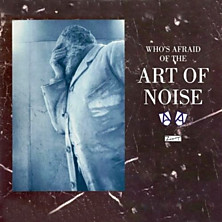