The group was first formed by Sergei Erdenko in 1991, and has since appeared at an impressive list of European festivals and concert venues. It takes its name from Loyko Zabar, the legendary gypsy fiddler hero of Maxim Gorky's first short story. Loyko, perhaps the world's most famous Russian gypsy ensemble, now has a new line-up - only Sergei Erdenko remains in place - and this is their first cd together. The group, originally a virtuoso trio, now has a fourth member, a female vocalist by the name of Leonsia Erdenko, whose stunning voice, now strident, now meltingly lyrical, summons up the beautiful Radda, to whom Loyko lost his heart.

From the rousing harmonic texture of "Shel Me Versty" to "Christmas Present for Nunja", a fiddle tune Sergeo Erdenko wrote for his young daughter played entirely in pizzicato, and from "Marjanja", a traditional wedding song, to "Gypsy Time", a lament for the Russian sailors who lost their lives when the submarine Kursk sank, this is a varied and compelling cd. 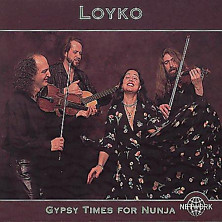