Laura Marling I Speak Because I Can Review

When Laura Marling appeared on the folk scene in 2008, aged 17, there was almost as much anticipation of her promise as praise for the music she produced. This was no bad thing, allowing development as an artist, and crucially not placing too much pressure or expectation on not-as-yet broad shoulders. Her debut, Alas, I Cannot Swim, was delivered to a generous critical reception, but the question asked this time round was always going to be one of progression, and the fulfilment of that abundant early talent.

Listening to Alas and second full-length, I Speak Because I Can, back-to-back, a change in tone – if not direction – is evident from opener and lead single Devil's Spoke. The production here is more deliberate and pored-over, expanding upon the earlier bare-bones approach. A leaf out of the Mumford & Sons school of orchestration has also been taken, with Rambling Man the greatest representation of this. The development in vocal styling is also stark; gone is the wispy, quick-fire phrasing and in walks deeper, slower, huskier proclamations. In many ways darkness has replaced the brightness.

It would, however, be disingenuous to paint this record as a collection of Marling's miserabilism. Despite the downbeat opening tracts, certain songs – Darkness Descends and I Speak Because I Can – abound with optimism and the ultimate, swelling crescendo of the latter displays an impressive mastery of dynamics. Similarly, at least a touch of variation is a necessity in folk, and this is demonstrated frequently, no more noticeably than when the boisterous acceleration of Alpha Shallows falls under a weight of heavy strums and gives way to the subtle, tender love letter to a country that is Goodbye England (Covered In Snow).

There was a justifiable argument to be made that Marling's real talent had to be seen live; the recorded compositions not revealing the entire picture. With I Speak Because I Can, that argument may now end. Though just 20, it doesn't appear within her scope to make an outright bad album, and here we are shown a few more glimpses of her gift, but yet not an overwhelming outpouring of it. It's clear that there has been a progression as a songwriter, with a previously unfound depth apparent on these ten tracks. Though it undoubtedly draws on the travails of the past two-or-so years, there remains, without a doubt, more in the can from young Laura. 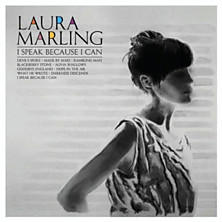