Clogs The Creatures in the Garden of Lady Walton Review

Embraces the listener with a silken touch, seducing them with beguiling beauty.

Padma Newsome’s Clogs – the group he co-founded with fellow member of The National, Bryce Dessner, back in the late 1990s – have long defied easy pigeonholing, delivering four albums of ambitious chamber-music-meets-jazz, via post-rock instrumentals between 2001 and 2006. This, their fifth long-play set, arrives after a four-year break in releases – and, more pertinently, represents the ensemble’s first foray into material with vocals.

Newsome himself performs some, but it’s largely left to an impressive guest cast to contribute the words woven between fantastical arrangements laid down on viola, bassoon, mandola and more. Most striking is Shara Worden, known for her work as My Brightest Diamond. Her operatic style is sure to provoke responses both enamoured and aghast, but to these ears her tones are velvety soft and supple enough to drape themselves over whatever Newsome can conjure, however complex he chooses to be. She’s already proved herself adept at complementing a vast array of different arrangements, via remix projects for two of her studio albums, and on numbers like The Owl of Love her voice decorates the inspired instrumentation around it as elegantly as the cream of Joanna Newsom’s recent triple-disc offering, Have One on Me.

This album’s title refers to the Giardini la Mortella, in Naples, where Newsome enjoyed a residency in 2005. Although it took him a significant period of time to pull together this end product inspired by the Italian botanical attraction, open to the public since 1992, The Creatures… doesn’t feel like a project unnecessarily embellished with adornments of affectation. Rather, its surprisingly sprightly and spare feel conveys compelling drama and, occasionally, devilish distemper, where it could have been expected to cloy. Each element has enough space to sing through the potential hubbub, and never is the mix uncomfortably cluttered. A labour of love this may be, but it’s not one where perspective has been obscured by affection.

Newcomers to Clogs’ singularly sensual sonic template will latch firstly to the tracks featuring the biggest names – Sufjan Stevens’s gentle closer We Were Here, and Matt Berninger’s stirring Last Song. But they’ll soon become enraptured by what accompanies these highest-of-profile pieces: music that embraces the listener with a silken touch and seduces them with a beguiling beauty that, still, sits prettily beyond the clamour of convenient categorisation. 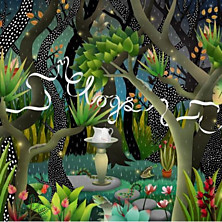