A collection of mesmeric, epic stillness.

The Antlers' 2009 album Hospice was one of those niche successes. The sort that has the blogs purring, the odd clued-up broadsheet too, but doesn't quite stretch beyond the word-of-mouth glass ceiling. It deserved its kudos though, stirring up a quiet storm with ever so fragile atmospherics, Peter Silberman's heartbroken falsetto and songs that took hold simply through sticking around for so long, hardly moving a muscle, that they became part of your brain patterns. It helped that the melodies were gorgeous too. For Burst Apart, the New York trio have made their sound a little fuller – in the sense that an aircraft hangar's fuller if you throw in a sofa.

Only Every Night My Teeth Are Falling Out (well, we've all been there) really cuts a rug, swinging along with politely swaggering guitar and an uncharacteristically throaty Silberman; otherwise, Burst Apart keeps a still, ghostly edge, with pattering beats here and there but firm emphasis on Silberman's vocal grace and eloquent guitar lines. It's a late-period Talk Talk approach carried over from Hospice, with just a hint of tighter commercial appeal.

Certain parallels seep in. The ringing, two-chord chime of I Don't Want Love is rather Doves, and No Widows builds the kind of dusky clouds that hung over Guillemots' recent Walk the River, but Wild Beasts are the real brothers here. Although there's no sign of the Beasts' quirkiness or sexy hips, Silberman's high pitch is a match for Hayden Thorpe's glorious reach and both bands carry a sense of a stadium rock band with taste – looking for a big sound but not at the expense of genuine emotion.

Burst Apart isn't a happy record, but it finds some grandeur in its sombre trials. So French Exit, where "Every time we meet you are shrieking in my ear", becomes a shy, pained anthem with its roaming synth signature; Hounds rises from a lone cushioned guitar to a horn-led big finale; closer Putting the Dog to Sleep even sounds as if it's going to be The Chemical Brothers' Where Do I Begin? for a couple of tantalising seconds, but we know it won't develop into a crashing loop of fuzzy beats. It will become a waltz with sparse clangs of metallic guitar. No surprises then, just a collection of mesmeric, epic stillness. 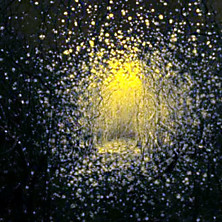