Fierce, raging and passionate - one of the greatest debut albums of all time.

Although coming four years after the first summer of punk, Searching For The Young Soul Rebels by Birmingham eight-piece Dexys Midnight Runners is probably the truest capturing of the movement's sprit ever released in Britain. Leader Kevin Rowland had indeed seen quite a bit in his "23" years, (as stated on Tell Me When My Light Turns Green – he was actually 27). He'd been in a smash’n’grab band of Birmingham punks; he'd toyed with a look that was to marry glam and safety-pin chic together (that was later half-inched by the new romantics) – recruiting a team of experienced players, he wanted to marry the anger of new wave with the emotion of soul music.

Remember, this was a time when soul was seen as something of a delicacy, liked by the northern crowd or females while the boys had their prog or Pistols. When Dexys played songs such as Otis Redding's Respect in their set, young British audiences had largely never heard of them and thought they were the group’s originals.

And what originals they had. With its biographical essay on the sleeve (“The firm was complete, now for the caper”), Searching... was unlike anything that had come before. Producer Pete Wingfield achieved a sound with the three-piece horn section that has never been recreated on vinyl. Close mic'ed and recorded right to the front, they sledgehammered their way into your heart.

The album begins with a radio being turned off after playing relics from rock, punk and 2-Tone, before Rowland calls the group to arms for Burn It Down, an attack on all who demean the Irish by reeling off a list of the country’s literary giants. It at once stated the moral ground that Rowland would operate on – a strong sense of Irish nationalism and a demand to be, if not understood, listened to with respect.

The album contained the No. 1 single, Geno; the powerful I'm Just Looking and also Keep It where the closing vocal duet between Rowland and his lieutenant ''Al'' Archer has a fascinating intensity to it. The final song, There, There My Dear, made a spoken plea to cast all else aside and welcome a new soul vision.

Sincerity and belief were exceptionally unpopular in the early 80s; Dexys Midnight Runners on Searching For The Young Soul Rebels embodied it. Nearly 30 years on, it has lost little of its power. Although Rowland may have had bigger hits (Too Rye Ay) and made a greater work (1985's Don't Stand Me Down), SFTYSR - fierce, raging and passionate - remains one of the greatest debut albums of all time. 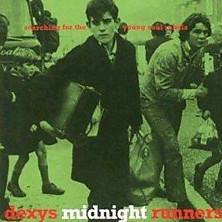