This is a strong contender for album of the year.

Darlings of this year's SXSW festival and lauded by Mojo as 'America's next great band', this Seattle five-piece describe their music as 'baroque harmonic pop jams'. All the above seems accurate except that it's hard to imagine pop music as perfectly formed as this emerging from a jam session. Lead singer and songwriter Robin Pecknold creates melodies that are – like all great pop – simultaneously familiar and unique, sounding like they've just fallen from the sky, and utterly unashamed of beauty. How can this be a new band? They sound like they've been playing this music forever and they're fantastic. And no, they owe nothing to their hometown's grunge legacy.

Even though American church music, Brian Wilson and Crosby, Stills, Nash & Young are obvious local influences, Fleet Foxes' music is also shot through with a distinctly Anglophile melancholia. The spooky, ruminative Tiger Mountain Peasant Song most obviously echoes Fairport Convention's Fothergay, as well as the traditional ballad Scarborough Fair. The production sometimes hints at a 'Spectoresque' wall-of-sound, with almost orchestral arrangements in places, but the sound is never pompous or over-filled, and there are several more pastoral, stripped-down guitar-and-voice interludes such as Meadowlarks and the plaintive closer Oliver James.

Pecknold's colleagues often cloak his extraordinary soaring tenor (Tim Buckley springs to mind) in gorgeous vocal harmonies, as on the chugging, country-flavoured Ragged Wood and the jangly Quiet Houses. Pecknold would sound great singing any lyrics but his combine dream-like nature imagery with an archaically poetic turn of phrase, refreshingly free of predictable, corny rhyme schemes. White Winter Hymnal is an especially evocative example: ''was following the pack/All swallowed in their coats/With scarves of red tied 'round their throats/To keep their little heads/From fallin' in the snow…''

You may not spot the more exotic instruments they use (including Chinese Guzheng and autoharp) but it's the simplest that makes the most effective impression – a tambourine that flickers away through about half the tracks, like a cypher for Fleet Foxes' lovely, folky, optimistic music, which conjures up an imaginary lost sound world. This is a strong contender for album of the year. 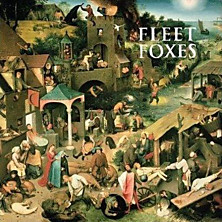