Cold Cave’s music would have slotted in seamlessly during BBC4’s recent Synth Britannia documentary. Although they’re a newish outfit, one that comprises former members of various leftfield US indie or hardcore groups, and despite the fact that they’re based in Philadelphia, they couldn’t sound more like a synth-pop crew from early 80s Sheffield – or London, or Basildon, or Liverpool – if they tried. If you played Love Comes Close to someone unfamiliar with their work, they could easily be forgiven for assuming it was unreleased recordings by early Depeche Mode, Human League, Cabaret Voltaire, Soft Cell, OMD, Fad Gadget, The Normal, or the synth-pop noir of Throbbing Gristle at their least extreme.

Cold Cave are essentially a vehicle for Wesley Eisold, who sings in a lugubrious Phil Oakey baritone and describes himself as a “poet, writer thinker and musician”, in that order. His intention with Love Comes Close was, he says, “to make a beautiful album to balance all of the ugliness I've put into the world”. Using a blend of analogue and digital technology, he explores the art of darkness with songs that are catchy and hooky, featuring, variously, sweepingly cinematic synthscapes and insidious keyboard motifs over brutal jackhammer beats. Meanwhile, the titles include Hello Rats, Youth and Lust and The Laurels of Erotomania. The latter is typical: the opening line is, “I’m going to put you in the hospital”, but it features a circular low-end keyboard motif and a higher-register pattern on top, both utterly irresistible.

Even the harsher Cold Cave songs will contain an alluring chord sequence or some prettifying female vocals courtesy of keyboardist Caralee McElroy. On Life Magazine the fuzz and distortion are used in the service of a pop melody. By contrast, the bleak futurism of Hello Rats reminds you of early synth-pop’s roots in post-punk and the industrial avant-garde while Heaven Was Full is equally menacing and Foxx/Numan-esque, Eisold’s voice full of foreboding. Best of all, though, and the highpoint of Cold Cave’s project to combine dark and light, is The Trees Grew Emotions And Died, the male/female unison vocals making it sound like a Serge/Charlotte duet for alienated synthesists. 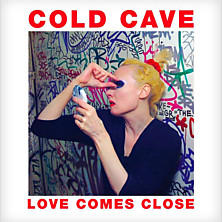