The Leisure Society Into the Murky Water Review

Second album of literate pop from Brighton via Burton-on-Trent outfit.

Even before you get to the music there is plenty to pique one’s interest with The Leisure Society. Mainman Nick Hemming was in 90s shoegaze band The Telescopes and shared a further outfit with actor Paddy Considine and director Shane Meadows. They had two consecutive Ivor Novello nominations in 2009 and 2010, for Best Song Musically and Lyrically, and have had the approbation of everyone from Guy Garvey to Brian Eno, who described their debut album The Sleeper as "beautiful".

It’s a certain type of beautiful that TLS offer. If you liked Shelleyan Orphan or enjoy The Mummers today, they should take your fancy. As with those two, you get the sense not of pop groups but of collectives; of a core team with additional musicians drafted in when extra colours and textures are required. In the case of TLS, that means, variously, double-bass, violin, cello, flute, mandolin, glockenspiel, drums and maracas.

There are almost as many words as sounds. Even the titles go on a bit. Hemming isn’t as furiously verbose as Elvis Costello, as cerebral as Paddy McAloon or as geekily deranged as Jarvis Cocker, but he’s in that general ballpark. More than anyone, he recalls Neil Hannon: Into the Murky Water comes from the same school of witty, wistful tunefulness as The Divine Comedy. And this despite suggestions that TLS are a UK counterpart to Grizzly Bear and Fleet Foxes.

This isn’t Americana, it’s quintessentially English fare. There are hints of US or European influences – for example, Dust on the Dancefloor brings to mind motorik folk pop, like The Modern Lovers and Neu! in a clinch with Belle and Sebastian, and Better Written Off (Than Written Down) is jaunty country rock – but it mostly has the ornate feel and quaint ambience of a 1930s seaside tearoom. Hemming’s voice has some of the adenoidal quaver but none of the florid flamboyance of Roy Orbison (or Hayden Thorpe from Wild Beasts), allowing the autumnal melancholy to unfold and "each savoured syllable", as he sings on Although We Are All Lost, to be heard. It all adds up to a record for those who want thrills but don’t want them dumb. 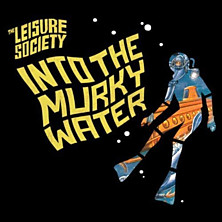