Goo Goo Dolls Something for the Rest of Us Review

The UK has never embraced the Goo Goo Dolls as readily as the US. The New York trio’s biggest hit, 1998’s Iris, topped the Billboard chart but only limped to number 50 here. It took Ronan Keating, of all people, to make it a hit – the Boyzone singer’s version peaked at 12 in 2006, but was also his first single to not break the top 10. Suffice to say the multi-million-selling pop-rockers aren’t regulars on too many Brits’ personal playlists.

Their ninth album isn’t likely to change that dramatically, sticking as it does to a formula that’s served them splendidly since shifting from an early, grunge-like outfit to a polished, commercially box-ticking ensemble with every intention of maintaining their career trajectory. And there’s no shame in that: it’s not like you, reader, would turn up at work after 15 years of doing a job one way and proceed to tear up the rule book you’d established for yourself. Such actions tend to have repercussions, bad ones. Nutshell summarisation: Something for the Rest of Us is every bit as easy on the ear as each of their albums has been since 98’s big-league breakthrough, Dizzy Up the Girl.

So easy on the ear, indeed, that maintaining focus can be difficult. John Rzeznik’s gruff tones are always the scene-stealing element of any track, but when he’s barking out well-worn clichés about love and loss, it’s a task to read between tired lines and hear some heart. Several tracks aren’t so much dripping with weak metaphors as drowning in them. But the lyrical side of Goo Goo Dolls has never stood up to much serious scrutiny – the point is that these songs are swiftly processed, ensuring sing-along potential is realised amazingly fast. These are songs for belting out in traffic-jammed cars, for humming along to in shopping malls while waiting for a partner to finish up in the changing rooms. They’re not supposed to challenge the grey matter. They are as exclusive as own-range supermarket clothing.

Lead single Home has already performed well in the States, offering evidence that Goo Goo Dolls remain a mainstream force to be reckoned with on the other side of the Atlantic – but it’s unlikely they’ll ever repeat that success here. However, British fans of big-chorused rockers like U2, Journey and Bon Jovi yet to investigate this lot are encouraged to do so, as many traits are common across said acts. 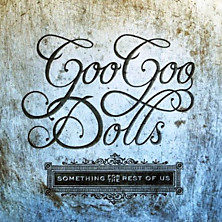