History tends to overlook the wilful unorthodoxy of early Keane.

Although formed in 1997 – and Brit Awards winners as long ago as 2005 – Keane still feel like Johnny-come-latelies, so regularly and roundly are they dismissed as anodyne bandwagon-jumpers and pink-cheeked, Coldplay wannabes.  It’s not hard to scoff at an internationally successful group of middleclass white chaps from patrician East Sussex, whose debut album was an instant UK number one and whose subsequent ascent seemed to involve about as much horny-handed dues-paying as an ex-Etonian sauntering onto the front bench of the Conservative Party.

In fact, versions of Keane had been slogging away on the toilet circuit for years before being picked up for a single on indie imprint Fierce Panda, in 2003. That single, Everybody’s Changing, gave the group their proverbial ‘overnight’ hit and a major label deal followed.  So far so conventional, perhaps, but history tends to overlook the wilful unorthodoxy of early Keane. They were, let’s not forget, a three-piece group who could afford the ‘luxury’ of a non-instrumentalist frontman and who eschewed guitars altogether.

Everybody’s Changing – a universally accessible, 20-something whinge about being left behind by ones peers – remains the standout track on Hopes and Fears, the aforementioned chart-topper which was inescapable throughout summer 2004. On it, singer Tom Chaplin’s bruised chorister’s intoning comes across as not so much diffusion line Chris Martin as entry level Thom Yorke, with an added pinch of Bono and even a soupcon of Freddie Mercury in there for mainstream audience-sating good measure.

The album’s under-heralded kingpin is Tim Rice-Oxley – his battery of keyboards providing chunky rhythm, chiming contrapuntal melody and pulsing low end on undeniably hook-laden, deluxe indie-rock anthems like Somewhere Only We Know and Bend and Break. Indeed, there is no shortage of song craft here, and only the closing Bedshaped seems to truly justify Keane’s reputation for wetness – its lyrics of teenage diary self-doubt unmitigated by Oxley’s odd, Theremin-like tones or Richard Hughes’ vigorous drumming. Chaplin’s wanly emoting falsetto, just about credible elsewhere, here sounds aggravatingly ersatz and it suddenly becomes clear why, while some would canonise Keane, others just want to give them a good slap. 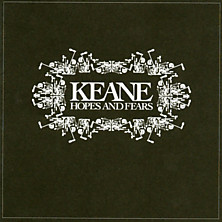