A ridiculous but brilliant debut.

Every debut album ever made is sent out to journos and DJs with a piece of paper telling you that this brand new noise has no precedent in musical history. Which can make it easy to miss when it actually happens. But, in order to get that these three people from Bordeaux and a drummer from Berlin are the genuine maverick article, one just has to grab a listen. And be confused. And delighted. And frustrated. And appalled. And strangely aroused. And then listen to track two.

Previous single Craig Machinsky, for example, is arguably jazz, right down to Joe Heffernan’s syncopated drums and complex time signatures. Except it really, really isn’t jazz. And "You don’t respect me / ’cos my skin is black", shouldn’t sound that interesting, as a statement. But Luvinsky Atche’s passionate French croon and profane mumbles, the chipmunk harmonies, the come-hither piano riff, and the freewheeling rhythms make the very idea of racism seem preposterous. A quick look at this charismatic, flamboyant black man fronting a pretty interracial band that seem to hear a world together that no-one else can multiplies the point by 10.

So, by the end of My Main Shitstain, you have heard a band play post-punk-New-Orleans-hip-hop-chanson-indie-rock-Manu Chao-biker-metal-African-free-jazz-harmony-pop, and give it all some kind of enveloping protest-comedy logic that explains exactly why Mark E. Smith asked PSY to support The Fall. If the album has a flaw, is that it occasionally – on tunes like Brainwashed and Surprise – sounds quirky, wacky and zany… and nothing else.

Paris Suit Yourself could very easily be one of those groups that make a cult debut, and then disappear, unable to take a man squealing "gimme a blowjob" while simultaneously impersonating Ol’ Dirty Bastard and Lux Interior of The Cramps into something substantial and sustainable. But that’s the joy of My Main Shitstain. In a 2011 music world dominated by career plans and business models, Paris Suit Yourself don’t give a flying one. They are amused, angry, irreverent and unfocussed, as things called art-rock, punk and indie used to be by default, once upon a time. And when they hit you with a big, dumb, impatient, and genuinely funny rave-up like Lost My Girl you feel dead grateful that bands who defy logic do still exist and that labels like Ninja Tune/Big Dada continue to do the stupid but right thing and release their ridiculous, brilliant records. 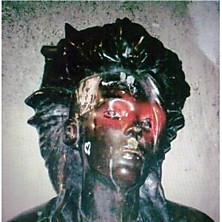