Jimi Hendrix Are You Experienced? Review

This is the sound of the future arriving; tacky, awkward, inspirational, exciting,...

It’s hard to imagine an album like Are You Experienced? getting made these days. Even harder to imagine is a major label picking up this expansive combination of pop, rock, soul, jazz, funk and stoned experimentation. The marketing people would have a fit trying to figure out how to sell it to the kids as they A&Red the life out of it.

When recording on this album began in 1966 (finishing in 1967) there were only a handful of people tinkering with the format of the three minute song. Hendrix’s arrival on the scene (the archetypal stranger in a strange land scenario) upped the ante and didn’t so much nudge things along as give them an almighty shove after which rock music would never be the same. Even ignoring the likes of “Hey Joe” and “Purple Haze” (as singles they were not included on the original album) tracks as “Fire” stretch out the baton that bands such as Deep Purple would so willingly grasp. Similarly, the faintly ludicrous cock-rock antics of “Foxy Lady” graphically joined the dots on the whole sex and music shebang in a way that a nation weaned on Hank Marvin heroics could barely guess at.

Whilst some of the licks shot-blasted across the disc ape the twangy pop tones of the day, his solo on “Manic Depression” sounds like its being beamed in from another dimension altogether. “Red House” remains a dazzling blues exhibition that rightly made the jaws of London’s musical elite drop. It’s a sobering thought that when this originally came out in May 1967, the only other serious contender for the crown of guitar godhood, Cream’s Disraeli Gears, was still six months from being released.

The psychedelic flummeries added to an already rich recipe (the title track and “Third Stone From The Sun”) occasionally results in a kind of multi-coloured indigestion. Whilst such embroidery indelibly watermarks the album, it rarely detracts from the stand-out, casual brilliance that is so abundant. This is the sound of the future arriving; tacky, awkward, inspirational, exciting, perplexing and sometimes contradictory for sure, but the future nonetheless. 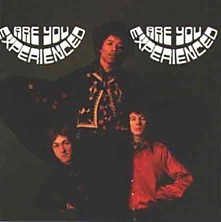