Alela Diane To Be Still Review

A perfect gem of album from a significant new talent.

To Be Still is the follow-up to psych folk revivalist Alela Diane's small-but-oh-so-perfectly-formed debut, The Pirate's Gospel.

Diane hails from Nevada City, California, a former Gold Rush town whose heyday is for behind it but nonetheless can boast amid its 3,000-odd population the father of American minimalism, Terry Riley, former Supertramp frontman Roger Hodgson, folk singer Mariee Sioux and harpist and singer-songwriter Joanna Newsom, who has described the town as, ''swarming with artists and hippies and old prospectors''.

There's certainly gold aplenty to be found in To Be Still, and more than enough to satisfy hippies and artists. There ought to be a sticker on this album advising it should only be listened to in front of an open fire under summer stars and, ideally, sitting cross-legged. Diane is a minstrel who enchants with lyrics all wispy and winsome and a voice as mellow, warm and intoxicating as a patchouli incense burner.

Decorated with what she calls ''more instrumental filigree'' than was on evidence on her debut, To Be Still subtly deploys lonesome fiddle, heart-plucking banjo, keening pedal steel, blood pulse percussion and raindrop guitar to beguile and bewitch in equal measure.

Diane's distinctive bluegrass-tinged vocal delivery – a cracked-caramel amalgam of Vashti Bunyan, Natalie Merchant and Iris DeMent – errs on understatement, the fragile, fraying edges occasionally cracking with dark-hued pain or blooming into a coyote’s full-moon wail. The dominant tone is reflective and nostalgic nd deftly describes assorted hymnals to the natural world, the past, family, friends, love and life getting in the way of living.

With pretty much every track a stand-out track, Age Old Blue, a wistful paean to Diane’s Scottish farmstock ancestry, with rough-hewn but luminous vocal support from veteran Michael Hurley, the yearning but unrealisable dreams of The Ocean, the brittle chill of White As Diamonds – ''Some hearts are ghosts settling down in dark waters / Just as silt grows heavy and drowns with the stones'' – and the dream-induced hyper-real jumble of Dry Grass & Shadows all stand – and reward – repeated scrutiny.

A perfect gem of album from a significant new talent. 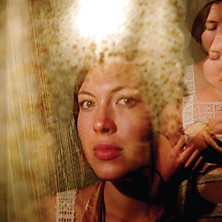