Vic Chesnutt At the Cut Review

For a man who recently described his relationship with America as being one centred around the love/hate axis with a bit of Stockholm syndrome thrown in, Vic Chesnutt seems in no hurry to give up on his continual, arresting grapple with these themes on this, the 13th album of his career. At the Cut sees Vic engaging in head-on battles with alienation, isolation and human failings of the body and heart, though before a more abrasive, less folksy backdrop than previous offerings.

Those soporific elements, however thickly laced with unsettlement, are prefixed barely a minute into the opening track Coward. Here, the atmosphere, brooding and intense, swirls, lilts, fades and then erupts into savage stings of violence. A typically cantankerous lyrical stab at notions of the true nature of heroism (“submissive dogs can lash out in fear”), Chesnutt’s voice transcends from a whispering lone woodsman to an almost banshee-esque wail of malevolence. The listening experience is akin to sitting in a collapsing wood cabin in the wilderness of Chesnutt’s home state of Georgia as a humdinger of a storm crashes into its heavy oak door, then retreats, unidentified, into the night.

Lyrical adroitness is one of Chesnutt’s trademarks and perhaps goes some way to explaining how he has previously managed to work with the likes of Michael Stipe, Jonathan Richman and Kurt Wagner of Lambchop. On the more harmonic tracks that make up the latter part of the album, none are more laced with Chesnutt’s uneasy realisation of mortality than Flirted with You All My Life: organs and guitars groan and flutter with a country twang while Chesnutt implores, “Death, I’m not ready / o’ death you hector me”.

Penultimate track It Is What It Is perhaps comes closest to an expression of Chesnutt at his most engrossing and wilfully verbose. Violins that seem to have been found in the mothballed loft of a Carson McCullers vignette of yore swoon behind Chesnutt’s aggravated yet woozy proclamations of how he can be “syruply optimistic one moment / and then gravely pessimistic the next”.

As pretty as a Sunday drive along the B-roads of the American south in places, the sunshine never lasts long in Chesnutt’s world. At the Cut sees him in typically torn, perplexed and wonderfully articulate form. 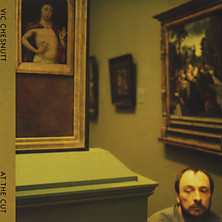