Most of us probably hadn't heard of Just Jack before the very end of 2006. Then suddenly he's everywhere – selling out gigs, hitting the top echelons of the charts and appearing on every television show that'll have him. Little did we know that he'd done all this before with debut album The Outer Market, released in 2002. He didn't have the benefits of a major label behind him then and his single charted 162 places lower than "Starz In Their Eyes" did. His breakthrough hit, an ode to the 15 minutes of fame culture, shouldn't be mistaken as a one hit wonder.

It'd be easy to label Jack as the new Mike Skinner. After all he is from that same urban decadance camp of talky-singing over toe-tapping melodies. But there's something very different about Jack. While The Streets have a whale of a time sampling house and garage styles, Jack is much more chilled out, working instead with a groovier hip swing. The quite astounding opening track "Writers Block" has a shuffling disco bassline while "Hold On" takes a 90s piano based funky house track complete with rousing female vocalist and transforms it into a haunting melody perfect for a Baleric sunset.

Honest to the core, Jack doesn't want to just accept what life has dealt him. He questions and analyses everything thrown at him. During come down track "Disco Friends" you can imagine him in a nightclub standing on the edge of a dancefloor furiously scribbling lyrics into a notepad.

Despite describing himself as a 'cheeky chappy' not everything is as chipper as "Starz In Their Eyes". The Specials-esque could-be Bond Theme "Lost" and emotional penultimate track "Mourning Morning" are two examples. In the latter he bemoans the loss of a relationship set against lush melancholy strings, Jack sings "I really want you to stay but I know you have to go." It's almost the sentiment we feel when coming to the end of this album. We’re glad you’re back Jack. 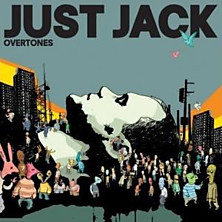