Tragedy was lurking just around the corner, but for these precious moments they were,...

There are many great live double albums. It was probably Cream with Wheels Of Fire who set the template for distended albums that allowed the band to ahem 'explore' their lengthier numbers by making them a little more...um, lengthy. Van Morrison's Too Late To Stop Now? Thin Lizzy's Live And Dangerous? Crosby Stills and Nash's Four Way Street? All marvellous of course, but the Allmans did it best...

By 1970 the band had completed two fine studio albums but hadn't been able to translate their live reputation into fiscal returns. The solution, of course, was to give the public a good compromise. Remarkably, for such a deep-rooted bunch of good ol' southern boys, they'd found a spiritual home on the East Coast at Bill Graham's New York Fillmore East. With this in mind the tapes rolled on two nights in November and the results were condensed into At The Fillmore East. Paydirt was hit.

While many remember the Allmans as essentially a superior version of (ugh) Lynyrd Skynyrd or even (good grief) Black Oak Arkansas, what they really represented at this point was a melting pot of styles welded together to produce something incredibly sophisticated while retaining the requisite 'jamming' looseness needed to entertain the free-thinking audiences of the time. Duane Allman, already a session player par excellence, loved everything from jazz to blues as did co-lead Dickie Betts. Their duelling Les Pauls rode the matching rhythms of twin percussionists Jaimoe and Butch Trucks (still the best name of any drummer on the planet). Topping it all off was sibling Allman Gregg's husky blues wail and lyrical Hammond.

Together they could do what so many bands of the time tried and failed: play numbers for half an hour and never once resort to cliché or repetition. Here reside the defining moments of the Allmans' career. "Whipping Post", already a behemoth of tortured soloing, here becomes an exploration on a par with anything Miles was attempting. Indeed the other monster cut here, ''In Memory Of Elizabeth Reed'' is Bett's homage to Miles, and amply demonstrates his fantastically complex style.

Whether delivering the blues with Duane's slide licks daring grown men to weep ("Stormy Monday"), or with Gregg's song writing skills to the fore on more succinct gems like "Midnight Rider" (a bonus cut on this deluxe edition) this remains a snapshot of a band getting off on each others' abilities and sharing the joy with one lucky crowd. Tragedy was lurking just around the corner, but for these precious moments they were, and remain unbeatable. 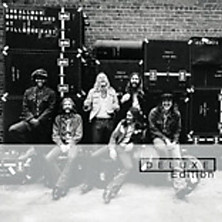