There are magnificent moments contained within

Lou Reed's controversial concept album Berlin – his third solo outing after the break up of The Velvet Underground – first saw the light of day in 1973 and was almost universally denounced. Rock bible Rolling Stone declared it a career-finishing ''disaster'' that was so bad it merited perpetrating ''physical vengeance'' on its creator before signing off with ''Goodbye, Lou''. Hardly surprising, then, that Reed should have stepped away from the work and ignored for so long, only returning to it in 2006 to resurrect it in a 30-date tour that has already spawned a DVD (directed by Julian Schnabel) and now this live recording, taken from two nights in mid-December that year at St Ann's Warehouse in Brooklyn, New York.

Critical appreciation of Berlin has been building since its damned and doomed debut, and in this super-charged performance, complete with 30-piece band and 12-strong choir, it's easy to hear and appreciate why. As a concept, the piece still suffers from its own flawed ambition. Whatever else it is, Berlin is not a rock opera, or any sort of opera, for that matter. Yes, there's a narrative – two drug-addled lovers take a lethal walk on the German capital's wild side – but the structure supporting it is so loose and the songs so arbitrarily connected that calling it an opera is nothing more than a fanciful affectation.

But there are magnificent moments contained within that bare comparison with the best of Reed's solo work. Equally, there are some excruciating moments, too, not least an horrendously awful take on The Bed.

While it lacks the clinical studio intensity of the original, this live performance carves its own muscular drama and dark poetry out of Reed's dystopian lyrics and coruscating music, the latter helped by the return of original collaborator Steve Hunter on electric guitar. Reed himself remains his timeless self: dour, po-faced, emotionally underplayed and vocally colourless but acutely acerbic and astringent.

Three other songs – Candy Says, in a duet with Antony 'And The Johnsons' Hegarty; Rock Minuet from Reed's 2000 long-player Ecstasy; and Sweet Jane from the Velvet's fourth album, Loaded – are offered as encores, cleverly if a little too subtly attempting to re-thread Berlin back into a wider context. 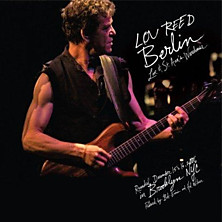