As albums that fall off a genre’s radar go, Elastica’s eponymous debut ranks high. Entering the chart at No. 1 in 1995 and nominated for the Mercury Music Prize, Elastica is a neglected gem from a time when bands were dominated by effervescent lead singers – none more so than the first lady of Britpop, Justine Frischmann.

Frischmann was more than just Damon Albarn’s muse for the all-powerful Blur – her contribution can be seen in young female artists like Lily Allen and Amy Winehouse – brazen and brassy – Justine added a hint of androgyny into the mix and became the tomboy next-door that the NME craved.

Elastica is as memorable a record as the pretenders to Frishmann’s throne at the time – Sleeper with Louise Wener and Republica’s Saffron – were forgettable. The openly suggestive lyrics of groupie-bating ‘'Line Up'’ and dangerous sex in ‘'Car Song'’ are as crude as nudge-nudge-wink-wink tunes get, but they are no less fun for it – ‘'Vaseline'’ almost pips ‘'I Touch Myself'’ by Divinyls to the 'is she really singing about you-know-what?' award.

In ‘'Connection'’, Elastica produced their blueprint for what Britpop should sound like – it was punchy, pithy and built on a massive rip-off of a Wire riff that they didn’t care about – well, if it’s good enough for Oasis…

Frischmann’s monotone voice never becomes dull during the 40-minute blast and when they finish with the uncomfortably effective poke at impotence in '‘Stutter'’, so does their contribution to Britpop. She booted the door in, pouted and bitched until the drugs shut her up – for good. 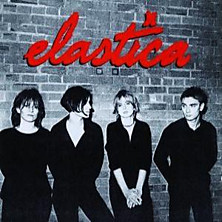