A mischievous release from a man accustomed to unconventional records.

It’s unfair that, almost half a century since their formation, John Cale remains best known for his role as co-founder of The Velvet Underground.

Navigating a path between the mainstream and unconventional, he’s maintained his early avant-garde tendencies while releasing a slew of solo albums of enviable diversity. He’s also composed soundtracks, worked with the likes of Nick Drake and Terry Riley, and produced artists such as Patti Smith, The Stooges and Happy Mondays. His reputation, however, is perhaps indicative of the fact that, of the band’s members, he’s arguably remained truest to their adventurous spirit.

As the title suggests, Shifty Adventures in Nookie Wood, his first full length in seven years, is a typically mischievous release. Characterised by Cale’s instantly recognisable, sombre delivery, it sees him turn his attention to the kind of adult contemporary pop recently favoured by David Byrne.

This time, however, Cale frequently pushes his voice through an electronic blender: he appears to be gargling mouthwash on Hemingway, and Living With You finds him distorted and dropped back in the mix. Both December Rains and Mothra, meanwhile, sport vocoder, albeit employed with a welcome restraint.

It’s hard to pretend this is entirely cutting-edge stuff, but the 70-year-old shows no sign of softening, his production rich without bowing to commercialism, his compositions full of unexpected twists and aggression.

These characteristics are particularly evident on the opening I Wanna Talk 2 U, a collaboration with Danger Mouse (from 2008) which trades hints of funk guitar and Eno-esque synths for a menacing chorus. Later, Scotland Yard, powered by a thunderous industrial beat, at times recalls a fresh, if claustrophobic, take on The The’s neglected 1986 masterpiece, Infected.

They’re balanced by tracks such as the haunting Vampire Café, which shuffles along like a sluggish take on Radiohead’s Bloom, and Mary, a thoughtful reflection on homophobia. In fact, by the time closing track Sandman (Flying Dutchman) has sighed its last breath, thoughts of The Velvet Underground have been almost entirely banished. 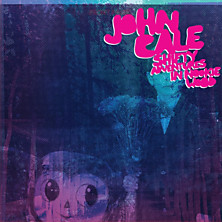