BSP simply do not know the meaning of the word 'mainstream'

There is a minority of music fans that already proclaim British Sea Power as genius. There are some that happened across them and fled, after stumbling into a festival tent to find air-raid warden hats and swinging guitarists. Others ran scared from a friend's copy of their debut, The Decline Of British Sea Power, hearing nothing but organised madness. Open Season is the welcoming wonder that will change that.

Thankfully, the hubbub of trends has passed them by in production of this album, but what else would you expect? This is, after all, a band that fills the stage with oak twigs, stuffed birds and bear costumes; that takes inspiration from Charles Lindbergh's plane and collapsing Antarctic ice shelves; that releases double A-sides with Czech bands inspired by the martyrdom of sixteenth century nuns.BSP simply do not know the meaning of the word 'mainstream'.

Open Season is everything that a fan of their debut could have wished for. It moves their sound along, smoothing a few of the yelps and bites that surrounded their opus before, without ever affecting the edge and urgent erudicity that makes them so vital.

They touch on The Cure's epicness, Joy Division's desolation, the Pixies' scrawling fire and Talking Heads' twisted pop, all without ever truly revealing their influences. Instantly familiar and yet unsettling, Open Season's passion comes in the broad brushstrokes of the driven "How Will I Ever Find My Way Home?" and the sinister tenderness of "North Hanging Rock". It also contains three songs - "It Ended On An Oily Stage", "Be Gone" and "Please Stand Up" - that could comfortably sit in the top ten (which might just make for the single most bizarre Top Of The Pops ever).

Often, bands change to make it out of the cult file and into the big time. With Open Season, British Sea Power will become the latest in a line that includes Pulp, The Smiths, Beck and Björk, who simply waited for the mainstream to alter its course and engulf their tributory without them needing to embrace it. 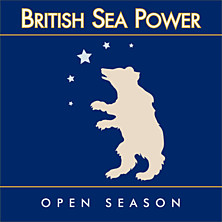