Junior Boys are up there with Hot Chip as modern masters of the electro-pop craft.

Ontario’s Junior Boys have been charming us with their soulful brand of electro-pop for a good few years now, but they’ve never sounded as much fun as they do on new album It’s All True.

A duo comprised of songwriter Jeremy Greenspan and engineer Matthew Didemus, the Boys’ latest record had its genesis in the unlikely surroundings of Shanghai, where Greenspan recently enjoyed a lengthy sojourn. While some traces of the local culture have left their mark – for example, the Chinese harp on opener Itchy Fingers – in general this is more of the same tried-and-tested sonic formula. Yet while previous albums – including the pick of the bunch, 2006’s So This Is Goodbye – have been predominantly downbeat affairs, It’s All True has a lighter, more playful tone, albeit one that is sometimes contrasted by some typically introspective lyrics.

The lean towards more dancefloor-orientated influences, which began on 2009’s Begone Dull Care, continues here, with the spirit of 80s US disco and house looming large throughout. This works just fine on more tuneful tracks like the excellent A Truly Happy Ending; but other efforts, notably the shapeless Kick the Can, are somewhat less successful.

Just to make sure nobody’s having too good a time, there are still a fair few moments that recall the awkward angst of the duo’s earlier work: hints of early New Order surface on the moody You’ll Improve Me, while Playtime is the kind of stark, slightly unsettling slow-burner that Junior Boys have always done extremely well. But the unquestionable highlight is Banana Ripple, the nine-minute epic that closes the album. It brings together all the best elements of their sound into a triumphant whole, boasting both an irresistible groove and a melodic, melancholy undertow. It also features a career-best vocal performance from Greenspan, who treads an impeccably judged fine line between euphoria and heartbreak that encapsulates the ethos of the song perfectly.

Though it’s patchy in places, the best moments of It’s All True offer further proof that Junior Boys are up there with Hot Chip as modern masters of the electro-pop craft. 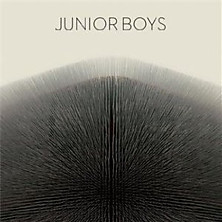