A proposition to confound expectations of what an ‘indie’ band should be.

Begone, indie-is-dead doom-mongers! As east London-based, Edinburgh-formed four-piece Django Django prove on this thrilling debut long-play platter, there’s life in the old dogged-by-disdain genre yet. Smart but not showy, clever but never at the expense of a catchy hook, this is ‘indie’ par excellence: guitars that ring through the mix like a clarion call from the inspired to take up arms against the dunderheaded legions of lad-rockers; buzzing synths that swirl around like a cloud of friendly wasps; lyrics delivered in mantras, summoning forth similar sermons to those once purveyed by the mighty Beta Band.

Django Django (part of a proud tradition of repeated-word tunesmiths, following the lineage of Talk Talk and Duran Duran; they’re actually named in honour of one of Django Reinhardt’s tutors who, so the story goes, had a stammer) call Because their label home and, much like another of the stable’s finer signings, Metronomy, their combination of dance moves, deep grooves and itchy guitars is, once the taste is taken to, wholly irresistible. It’s an unusual but potent potion they proffer, at turns funky and scratchy, propulsive with its percussion and, moments later, content to drift on waves of enveloping oscillation.

At its best, this album tweaks like the very best avant-pop should: with singular style and mass audience-embracing accessibility. So, the cowbell-clanging, bassline-throbbing Zumm Zumm – "Got to get to know / Got to get to know" times infinity – is a first-play pick; so too is the 6 Music playlisted Default, which at its outset sounds like The White Stripes taken hold of by Franz Ferdinand – naturally, it soon eclipses such convenient parallels by morphing into a low-end-wobbling creation entirely of its own design. That the band’s ‘leader’, David Maclean, is their drummer provides many pre-play clues as to the sound presented here: it’s rhythm leading melody, cadence over leap-out choruses, albeit in an altogether more ear canal-caressing form than the racket mustered by the similarly percussively powerful HEALTH – Black Sabbath to Django’s Black Lace. (If the latter were awesomeness squared, and not awful Eurovision also-rans, obviously.) Point is: this is pure pop to listeners of a certain persuasion.

But just as The Beta Band fizzled out without making a significant mainstream name for themselves, and the sublime Super Furry Animals have never captured as many hearts as their rather-less-inspired countrymen Stereophonics, Django Django could be forever confined to the pop sidelines. Which would be tremendously disappointing for anyone bemoaning indie’s vapid uniformity: for here, sirs and madams, is a proposition to confound your expectations of what such a band should be and excite your senses to fresh possibilities. 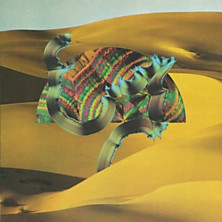