An essential heavy metal artefact given the deluxe anniversary treatment.

You don’t have to look far to see that heavy metal is once again in rude health. It has regained poll position as the biggest-selling genre in the world, with only hip hop giving it a run for its money. Long hairs in denim and leather are all across the pages of fashion mags and broadsheets, and have even invaded such magazines as NME and The Wire. But this media-friendly tip of the iceberg that is represented by diamante studded Motörhead t-shirts and ironic appreciation of corpse paint in hipster magazines is a mile away from the un-co-opted likes of Judas Priest.

The mighty Priest are everything that makes heavy metal the last true youth tribe. To the uninitiated they represent the naffness of the genre: the leather, denim, studs and spandex uniform and the harsh, histrionic, almost operatic vocal delivery. To their legions of fans, however, they will always remain the most important of all heavy metal groups. They represent the bridging point between the heavy doom rock of Black Sabbath et al and the myriad forms of extreme metal that came after the late 80s. They basically laid the bedrock for thrash, death and black metal. Also aiding the genre’s longevity is the uniform, which was popularised and codified by the group who combined the Hells Angels uniform with Viking and fetish elements.

But if Judas Priest are the gatekeepers of real metal, even they have an entry drug and that is British Steel, which here receives the lavish 30th anniversary treatment. The band was already 11 years old and onto their second (and most famous) vocalist, Rob Halford, by the time they released this revolutionary album. In very loose terms it represented a new found maturity and individualism in metal, as it severed the last remaining links to the blues that had informed earlier albums by fellow Black Country bands Sabbath and Led Zeppelin.

The showy virtuosity of previous albums was replaced by the chugga-chug riffola of Rapid Fire. The twin guitar assault of Glen Tipton and KK Downing was promoted to the fore on tracks like Metal Gods – meaning this would be the first album which would break the New Wave of British Heavy Metal (NWOBHM) into the mainstream. But mainly it was Priest’s continued ability to pen stone cold classics like Breaking the Law, Grinder and Living After Midnight that saw them move into the 80s at the top of their game.

This is an essential heavy metal artefact, packaged here with a live disc and accompanying DVD, recorded in 2009. The bonus content gives an important album of the past some contemporary context, rendering it every bit as relevant as fare from today’s younger pretenders. 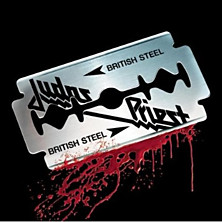