A very modern rock album with an ambitious appeal, yet unafraid to be a bit arty.

Good lord, Wild Beasts are amazing. Thrillingly outside of what passes for alternative music in these final days, yet still sufficiently ankle-deep in the indie, the Kendal foursome of Hayden Thorpe, Tom Fleming, Benny Little and Chris Talbot - who first marched into pop's consciousness with last year's Limbo, Panto debut - swoop and soar in a way not seen since the time of Suede's blouse-ripping early days, with a fine line teetering between the absurd and the magic, polymorphically writhing around in a sensual fashion long abandoned by northern herberts with guitars. Oh yes.

Two Dancers is a continued leap further into genuine stardom. A concise, balanced and throbbing jewel of an album, which you'll either hate - Hayden's unique falsetto divides opinion - or make you end up throwing all your belongings into the street because they just seem all so damn pointless.

Vocals are shared between bassist Tom Fleming (who reintroduces Whitby - for the first time since Cud anyway - into song on All The King’s Men) and main singer Hayden, who looks and sounds like he was kidnapped by brutes from a Home Of Exquisite Boys. With his flimsy limbs and pale loveliness he'd probably lose out if confronted with a falling leaf. His voice helps make Wild Beasts a cut above the rest. Whether dirty-angelic about booty calls and boots on opener The Fun Powder Plot, the clenched intent of Hooting And Howling or croonily effervescing on We Still Got The Taste Dancin' On Our Tongues or operatically going a bit Mansun on Underbelly. Stand-out of an album chock-full of them is This Is Our Lot: a potential lighters-aloft anthem that will be their end of set anthem moment for a good few years yet. 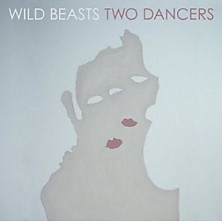