Fitz and The Tantrums Pickin’ Up the Pieces Review

Michael Fitzpatrick and his band, which includes former members of Dilated Peoples and De La Soul, are on a mission: to reclaim the original US R&B, an American invention, remember, even if the dominance of UK soul girls (Adele, Amy, Joss et al) on both sides of the Atlantic over the past few years would suggest otherwise.

Basically, if you’re a Stax and Motown fetishist, you’ll love what these revivalists are doing. Apparently, mainman Fitz is a fan of ABC and The Style Council and based this album on their early-80s white funk output, but there is no shiny post-modernism to be found on the debut Tantrums album. Rather, it is a feast of 60s and 70s soul references, both lyrical and musical. Indeed, so rife are they, and so cleverly are they woven into the songs, that you sometimes have to pinch yourself that you’re not actually listening to "the real thing".

Both the titles – Breakin’ the Chains of Love, Pickin’ Up the Pieces, L.O.V. – and the lyrics (with their allusions to holdin’ on and walking on by) are steeped in the lexicon of classic R&B. But it doesn’t stop there, as Fitz draws on a broader range of pop-culture sources, although even there the artists cited – Elton John, Hall & Oates – are famously in thrall to black music.

With Fitz’s gritty, passionate exhortations and the band’s tight, horn-drenched playing, much of Pickin’ Up the Pieces has the ersatz soul power of the band from Alan Parker’s movie The Commitments. Sometimes, it feels as though you’re listening to an album of long-lost Otis Redding and Sam & Dave B sides, or an oldies station playing lesser-known hits. Either you will find the imagery and vernacular scintillating or shop-worn. Often, it’s like listening to performances from Daryl Hall’s Live From Daryl’s House web TV show; there is a track here called MoneyGrabber (shades of Maneater), even one titled Rich Girls. But Hall & Oates – who moved into shiny, modernist territory themselves by the mid-80s – were never this unreconstructed.

For Fitz and Co, few if any post-60s developments in black dance music are acknowledged. Still, when it’s good and exciting, as on the standout Don’t Gotta Work It Out, with its simply thrilling keyboard coda, considerations of originality become irrelevant. 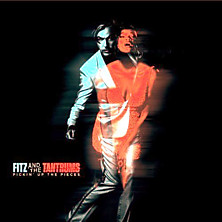