Neil Diamond, 70 this coming January, rebooted his cred over the 00s with two pomp-free, Rick Rubin-produced albums. The second, Home Before Dark, gave him his first ever US/UK number one. So he may feel he’s earned the right to indulge in a cosy, Strictly Results Show-friendly covers record. Dreams is again stripped-down – most tracks feature just his grizzled voice and a guitar or piano – but there’s no artistic risk in crooning Ain’t No Sunshine and Yesterday.

Yet that indefinable something that makes the greats great means there is a world of difference between Diamond singing Leonard Cohen’s Hallelujah and an X Factor contestant wobbling their scales. Neil sounds like he means it. There are cracks and tears in his vocal readings here, but they give it soul. Whether he’s truly in the zone or just employing a lifetime’s technique, Dreams, which on paper might sound twee, is really rather moving.

Not least when he offers a re-interpretation of I’m a Believer, the hit The Monkees borrowed to make their name and his. He slows it down, annexes a hint of the arrangement of I Am… I Said, and draws out its innate qualities as a modern hymn to romance. He tackles songs he loved when growing up (The Everly Brothers’ Let It Be Me) and numbers by contemporaries (The Beatles’ Blackbird, Leon Russell’s/The Carpenters’ A Song For You). There are charming curveballs – on Gilbert O’Sullivan’s Alone Again (Naturally) he presses home the pathos of the words, and on Midnight Train to Georgia he successfully switches the subject’s gender (not as easy as he makes it sound). He parches the Eagles’ Desperado ‘til it’s dry as a bone, and finds the core of nuggets by Harry Nilsson and Randy Newman.

In the US they’re pitching this as Diamond’s revelatory masterpiece, which is a bit rich considering he’s performed covers often before, and his own best songs were as strong as anything here. Still, what in lesser hands might come across as cheese incarnate broods beautifully on Dreams, a splendid showcase for that evergreen, emotive voice. 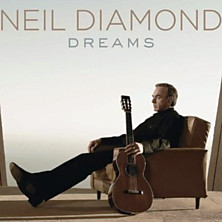