With six Grammys, seven American Music Awards and a total of 25 million worldwide...

Long before the likes of J-Lo and Britney Spears hypnotised the world with their frequently photographed rumps and midriffs, Toni Braxton spearheaded the cluster of desirable females with a knockout combination of seductive looks, silky vocal tones and an inclination towards dresses which seemed to be produced during a cloth shortage. But image aside, Braxton's career CV can't be laughed at. With six Grammys, seven American Music Awards and a total of 25 million worldwide album sales, record company bosses will be relying upon her to deliver the goods with her latest offering.

More Than A Woman is a diverse blend of danceable club numbers, trademark Braxton ballads and experimental tracks which borrow from the genres of rock and jazz.

First off is the feisty "Let Me Show You The Way (Out)". A new woman's anthem for 2003? I truly think so. Over a hammering hip-hop bassline, angry incessant piano chords and Braxton's calm but commanding vocals lies a telling tale of infidelity, which sets the theme for the majority of the album. Nothing demonstrates this so magically as "Hit The Freeway". What at first sounds like a quintessential Neptunes track - melodic synthesiser, staged handclaps and funky drum patterns - later transpires into an impressive slice of pop R&B. The chorus: "Farewell my lonely one, nothing else here can be done, I don't ever wanna see you again" is eagerly contagious. Revenge has never sounded sweeter.

For your dosage of classic love songs, turn to the elegant "Always". Harking back to the Toni of yesteryear,this is a tenderly honed R&B ballad with rich, multi-layered vocals, which add balance to the edgier, street-orientated tracks.

The album's surprise comes courtesy of Braxton's hubby, Keri Lewis who produced the standout track "Lies, Lies, Lies". The most notable element on this record is the usage of live instrumentation. Toni's vocals also provide an interesting mix, as her gravelly tones are pit against an electric guitar.

There's no doubt that More Than A Woman will sell bucket-loads. At age 34 Braxton is in a great position to serve both middle-of-the-road listeners with her high-powered ballads, as well the comrades of the streets with her attitude-ridden take on modern day living. 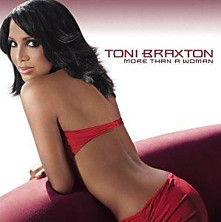