Vocals trip over each other in counterpoint and within the mix there's always enough...

Much has been made of the metaphorical significance of the Beta Band depicting themselves as android-annihilating cartoon superheroes on the front cover of Heroes To Zeros. Surely, some folk reason, this is a band brimming with confidence and an album chock-full of tight, snappy tunes? Few seem to have caught on to the flip side. On the reverse are four piles of clothes on a beach, discarded Reggie Perrin-style.

This surely signifies a band that long to shed their identities; desperate to escape society's expectations and attempting to start again from scratch. Of course with a band contradictory enough to publicly diss their wonderful first album both of these options could be true. The fact remains that Heroes... marks a whole new era for the Betas.

Kicking off with the spunky, horn-assisted single, "Assessment", Heroes... is a move further towards a more song-based approach. Gone are the meandering lo-fi dubs of the 3EPs and the ingenious loops and perversity of the aforementioned debut. Instead we get a tighter, more ethereal development of the funky breakbeats and (whisper it) rock dynamics of Hot Shots II. For the very first time our Scottish heroes are cranking up the guitars! Solos abound and acoustics ring pastorally. ''Out-Side'' (named ''Pot Pissin''' in the lyric sheet. Yes, I said lyric sheet) is mosh-mongous while ''Liquid Bird'' and ''Assessment'' contain riffs that could be taken from U2's first album.

But the Beta Band are far too oblique and tricksy to stick to any kind of dull 4/4 format. Vocals trip over each other in counterpoint and within the mix there's always enough bleeps and burbles to remind you that this is a very 21st century hybrid. ''Space'' explores both the inner and outer variety with a krautrock clatter. Elsewhere, they demonstrate their uncanny knack for low-key beauty on ''Wonderful''. It's left to tracks like ''Space Beatle'' and ''Rhodedendron'' to represent the off-kilter grooves of their previous work, albeit with a sweeter sense of melody.

Oddly the only negative point seems to be in the final mixing by uber-fixer/producer Nigel Godrich whose echoey touch (along with the strangely unemotional multi-tracked vocals) at times puts you in mind of mid-period Pink Floyd. It's not such a bad reference, but one can't help wishing he had some new tricks up his sleeve. This aside, the Betas now find themselves at a critical stage. The radical departures on Heroes... could lead them either way. Whether they conquer the universe or disappear into the ocean of sound, it's still an intriguing journey... 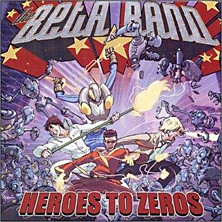