Dido Girl Who Got Away Review

Dido’s fourth album is both familiar and surprising, taking some unexpected turns.

If you were playing a word association game and Dido came up, you might be forgiven for blurting out "boring". And in some circles she's certainly acquired that reputation.

But hers is a musical formula that's proved hugely successful. Dido's No Angel and Life for Rent were two of the UK's best-selling albums of the late-90s and early 00s, earning 16 platinum discs between them.

Her third LP, 2008's Safe Trip Home, failed to match this level of success, but still entered the charts at number two.

Now 41, Dido is back with a fourth album that's reassuringly familiar. Her voice sounds exactly as you remember it, vaguely Celtic and slightly detached, and her music remains quintessentially pleasant.

Girl Who Got Away leans closer to electro-pop than before, but it's still filled with friendly melodies and plain-speaking lyrics.

At times here, though, plain speaking can mean utterly mundane. The title track begins with a series of sentiments that even Jack Johnson might think wishy-washy: "I wanna move with the seasons / And go with the flow / And take it easy / And let stuff go."

But elsewhere, Dido's approach makes her songs relatable and affecting. She sets the scene beautifully on Happy New Year, a song about a woman struggling to move on from a break-up.

"I'll leave the party early / After a drink or two," she sings glumly. "And check my phone for calls / Though I know there will be none from you."

Meanwhile, her musical choices aren't always completely vanilla. Day Before We Went to War is a spooky collaboration with Brian Eno, while Let Us Move On has beats by Kanye West's producer Jeff Bhasker and a guest rap from Kendrick Lamar.

The nicest surprise is Love to Blame: perhaps the first Dido track you could actually dance to. With its quivering bassline and bevy of electro blips, it sounds a bit like an early 80s club jam.

Admittedly, the album contains the odd soporific song like No Freedom, but these turns are outweighed by tracks with a strong tune or an unexpected hint of sadness. Certainly, there's enough going on here to make the naysayers feel guilty for blurting out that b-word. 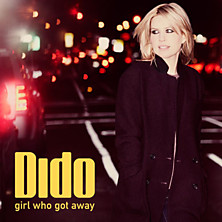