Despite moments of brilliance, this latest outing lacks power.

One of the highlights of this spring’s All Tomorrow’s Parties at Butlins, Minehead was the reformation of stoner-rock pioneers Sleep. With sinuous bass chords that could have parted the waters to Wales over on the other side of the Bristol Channel, Sleep proved why they’re a point of inspiration for many current avant-rock groups including London’s Part Chimp and LA’s Black Mountain. What’s more, after Sleep’s initial split Al Cisneros (vocals, bass) and Chris Hakius (drums) went on to form Om, a duo who took Sleep’s fearsome Bhagavata to create epic mantras of bass-heavy noise and cosmic lyrics about the “seraphim form”.

At the beginning of 2008, Hakius quit, and quite how the original Om are no more but Sleep have got back together is a question somewhere lost in a blur of flailing hair, but there we are. Sadly, while Sleep retain their elemental power, Om (now with replacement drummer Emil Amos), perform mantras as spiritually potent as a New Age trinket bought from a Euro hippy on the streets of Barcelona.

The problem is, quite simply, one of power. Whereas on their first three albums Om sounded like deviant cult leaders who’d taken up bench quencher sherry rather than sweet swelling smoke and commandeered a JCB for a joyride through a wildlife garden, God is Good is, at best, overly polite, and at worst downright risible. Meditation is the Practice of Death closes with an embarrassingly reedy and unimaginative flute that ought to soundtrack Flower Fairies rather than a two-piece behemothic rock group. Cremation Ghat I is even worse at its outset, with rhythmic clapping from some dubious northern California hippy retreat. The bass, which was such a rip-roaring core of Om’s previous work, merely lays down a comfortable bean bag beneath.

It’s frustrating, then, that there are moments of brilliance in the 20-minute opener Thebes, which still has glimpses of Om’s ability to make thundering bass grab the gut and send the listener forth as if in a barrel at the very moment it tips over the Victoria Falls... but at the crucial moment, Om pull back from the brink. God is Good? Unfortunately, the Devil has all the best tunes, and a Faustian approach might suit Om better next time around. 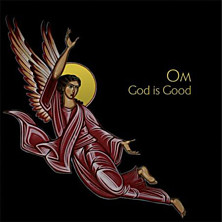