Indie-folk duo releases their best album yet, with a little help from a Mad Man.

An album by this veteran twee-pop duo on the studiously cute Fortuna Pop! label should be the most indie album ever made. But the promo accompanying Strange Moosic’s first single and opening track suggests that both camps want out of their ghetto. A video that begins with an adorably sad, shaggy blue Muppet-like creature and ends with the two Swedes playing the song in a forest may not be the stuff of Hype Williams’ dreams. But a band who have always operated on a cottage industry shoestring are suddenly able to award the starring role in their videos to none other than Jon Hamm, star of Mad Men and 30 Rock and current holder of Hottest Stud Muffin In The World Right Now status. Hamm takes the cuddly creature on a road trip and makes his gentle dreams come true, guaranteeing that every woman aged between 16 and 60 will fall hopelessly in love with the film. Whether any of them will notice the song…

It would be a shame if they didn’t. Because Herman Dune’s 10th album is undoubtedly their best, and there’s no earthly reason, barring daytime radio’s obsession with blinged-out anthems of self-empowerment through nightclubbing, why singer/guitarist/songwriter David-Ivar Herman Dune and drummer Cosmic Néman shouldn’t be accepted as a different kind of pop star. The duo make a jangly, gauche, bittersweet-yet-optimistic sound invented by Jonathan Richman and continued on by the likes of Orange Juice, Hefner and Belle and Sebastian, but with a muscular, sparse faux-American edge reminiscent of Nick Lowe and honed to perfection in their adopted home of Portland, Oregon.

This reaches peaks of melodic, summery and romantic happy-sadness here on the likes of Ah Hear Strange Moosic, Your Love Is Gold, Magician, Just Like Summer and the truly gorgeous Lay Your Head On My Chest, an on-the-road song so perfect you can already hear Springsteen covering it. All of which is a pretty extraordinary feat for a band that were favourites of the late John Peel a full 12 years ago, and who could easily have called it a day when David’s brother André left five years ago to make records as Stanley Brinks.

Obviously, this isn’t exactly strange music. But it captures something unfashionably warm-hearted and timeless; a place where rock, pop, folk and indie meet and swap stories over camomile tea about being dumped by girls who wear hairgrips and flowery dresses with Dr Martens. There should always be a place for this, whether John Hamm gets to warm the teapot or not. 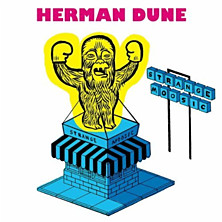