Refused The Shape of Punk to Come - Deluxe Edition Review

There’s no excuse for not having this landmark album in your collection.

The recent (expanded) reissue of The Rolling Stones’ Exile on Main St prompted widespread reappraising of an album largely dismissed upon its 1972 release. The band’s greatest-ever long-player, said a slew of critics. Such a shame, then, that they followed it up with turgid fare far removed from the lean vibrancy of their late 60s and early 70s heyday. If only they’d peaked after Old Shakey had delivered his Cobain-quoted Hey Hey, My My (Into the Black) in 79, with its key line: “it’s better to burn out than fade away”.

Sweden’s Refused certainly fizzed out of existence in a flash, rather than drag themselves across borders and stages ‘til every ounce of creativity and enthusiasm was bled from the four-piece. Listening to their final album today, 12 years after both its original release and its makers’ acrimonious split, what’s most striking is just how little it’s aged. Its title, adapted from Ornette Coleman's 1959 classic, was prophetic to say the least: this album’s influence can be heard in numerous hard-and-fast rockers in punk and hardcore circles and beyond. But just as Exile… sounds incredibly fresh compared with much of what the Stones conjured subsequently, Shape… positively bleeds vitality in a way that not one of the countless outfits it’s influenced has achieved.

The brilliant musicianship is what carries proceedings, what makes this such an indispensable album in the punk/hardcore firmament. Particular praise must go to drummer David Sandström, whose performances are rarely less than breathtaking. The left-leaning politics that comprise the record’s lyrical backbone had been heard before, in the work of Washington DC’s Nation of Ulysses for example. Refused succeeded where Nation hadn’t, though – in terms of a notable legacy, anyway – by mixing their capitalism-smashing messages with an instrumental punch that took what it needed from the jazz world without wholly diluting the aggression that fans had come to expect after two preceding long-players.

Dissent was apparent in the ranks, though, and despite attaining a (slightly) higher level of exposure in the wake of Shape… and its powerful lead single New Noise – “How can we expect anyone to listen / if we are using the same old voice?” – Refused split just weeks after this record arrived in stores, the seeds of dissolution sown during the songwriting process. When I interviewed guitarist Kristofer Steen in 2006, he told me that Shape… didn’t work live – a problem, as it was in this area that Refused regularly excelled. His telling words: “It didn’t click with our core audience.”

But now that audience has swelled to a size that Refused could never have imagined appealing to when they broke up, while on a US tour. To meet this increased demand, Shape… now includes a live disc (featuring comparatively straightforward material from earlier albums) and the 2006 documentary Steen directed on the band’s demise, Refused Are Fucking Dead. These extras sweeten the deal, but frankly: if you have any affection for hardcore, punk, or the history and evolution of rock music in general, there’s no excuse for not having this genuine landmark album in your collection.

Read the author’s 2006 interview with Kristofer Steen on DrownedinSound.com 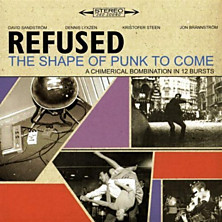