If the title of the album, her first since 2008’s Detours, doesn’t give the game away, then the cover versions of The Jackson 5’s I Want You Back and Terence Trent D’Arby’s Sign Your Name should: this is Sheryl Crow’s soul album. And while the title is 100 Miles From – not to – Memphis, there is the sense that she’s been heading this way for years; finally, after all her musical peregrinations, she’s coming home. It works literally, too: Crow grew up in Missouri, not far from one of America’s premier soul cities, and this was the soundtrack to her youth.

Of course, there is a vast difference between The J5’s version of R&B and TTD’s, but instead of offering a miscellany of soul styles, the influence of the titular city pervades many of the tracks, including the non-originals. Even Sign Your Name is re-imagined as a mid-tempo Al Green classic and appears to have been recorded by the very same Hi Rhythm Section – the house band for Willie Mitchell’s label – used by Green, Ann Peebles and more. It’s got that gorgeous loping gait instantly evocative of Hi, as does lead single Summer Day, which also features essence-of-Memphis horns.

The album was co-produced by Crow and Doyle Bramhall II, who worked with Eric Clapton, a rumoured ex-squeeze of hers. He’s a good fit: …Memphis has the feel of a 70s Clapton album such as 461 Ocean Boulevard, with its mix of white soul, rock and reggae lite, tasteful rhythms and natty licks – Keith Richards adds his trademark scything guitar to the politely skanking Eye to Eye, while Say What You Want recalls Stephen Stills’ Love the One You’re With. It’s all very early 70s – Peaceful Feeling even references Sly Stone’s Dance to the Music and The Isley Brothers’ Summer Breeze.

This is an album nostalgic for a time when soul, circa Watergate/Vietnam, had an upbeat message and a positivist agenda. Here, though, Crow puts aside politics for pure fun. And there are nods to contemporary RnB, with a cameo from Justin Timberlake on Sign Your Name. Throughout, Crow seems to be enjoying herself, none more so than on bonus track I Want You Back (complete with dedication: “For Michael With Love”), her voice suffused with the exuberance of, well, an excitable 11-year-old boy. 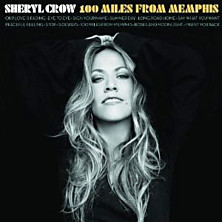