This is not just a musical firework display but a carefully thought-through performance.

The Four Seasons is such a famous work that it has become too easy to hear them without really listening, so a new recording is a welcome opportunity to take a closer and hopefully fresher look. Sarah Chang’s disc comprises of the four concertos which combine to make The Four Seasons, plus Vivaldi’s lovely Concerto in G minor, Op.12 No.1.

Despite the work’s fame, not everyone will know that The Four Seasons were based on four sonnets to the seasons. It is programmatic music at its most extreme, with the music faithfully following the ideas as they appear, stanza by stanza. Vivaldi probably wrote the sonnets himself, intending them to be performed alongside the music. It is surprising, then, how often this background goes unmentioned when the knowledge is so crucial to properly understanding what is going on in the music. This in mind, it is great to see the sonnets printed in this CD booklet, with a quote from Chang saying how important they are to her interpretation of the concertos. However, that’s it - no notes on authorship or on how they relate to the music. If you’re going to name the sonnets as essential to understanding these works, you do need to do more than print the texts.

I’m rather ashamed to be griping about mere packaging, but I do think that there was an opportunity here to lead listeners towards a better understanding of Vivaldi’s most famous work, and this tantalisingly only does half the job. However, the musical performance more than makes up this. The Orpheus Chamber Orchestra’s playing is crisp and zingy, keeping a light touch even through the pounding forte passages. Meanwhile, Chang plays with verve and intelligence. This is not just a musical firework display but a carefully thought-through performance, very evidently drawing inspiration for phrasing and dynamics from the accompanying verses. The Concerto in G Minor rounds off the programme stylishly, making this a disc well worth buying. 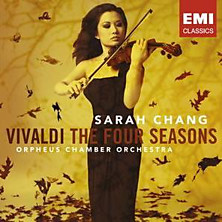