Hugely impressive, technically, but too cold and forbidding for many tastes.

Through 14 albums and numerous singles and EPs, Essex boy Tom Jenkinson has endeavoured to make electronic music do things it isn’t supposed to. A virtuoso on bass guitar as well as analogue and digital machinery, his Squarepusher alter ego has consistently brought a freewheeling jazz mentality, a sense of humour and a jaw-dropping technique to that part of the techno world which is aimed at the bedroom and headphones rather than the dancefloor.

Jenkinson’s latest opus sees him return to a solo format after 2010’s so-so Shobaleader One experiment with a band format, and is designed to fit with a new live show involving a space-age helmet and much flashing, strobey, abstract imagery. Clips on YouTube suggest that the show is very reminiscent of Orbital at their stadium rave peak. Which is convenient, because this set sounds like Orbital with a severe case of St Vitus Dance.

Fans who especially love Jenkinson’s astonishing, thumb-plunking bass-playing and droll vocal tracks like My Red Hot Car and The Coathanger will be disappointed. Ufabulum is all synth instrumentals all of the time and, unlike previous albums, doesn’t feature a standout classic that draws you into the album’s less accessible elements. From the fidgety glitch of opener 4001 onwards, the mood is that of an ominous soundtrack for an unmade sci-fi movie.

The Metallurgist may revisit the murky junglism of Squarepusher’s early years, while Red in Blue’s beat-less atmospherics resemble the 70s electro-classicism of Wendy Carlos and Isao Tomita. But the mood is similarly dark, relentless and deliberately irritating to those who like their music with at least a little groove and melody. A few surprisingly wishy-washy string-synths aside, it is, as always, hugely impressive – particularly on the steely car engine cut-ups of Dark Steering and 303 Scopem Hard, which sound like they’re auditioning for heavy usage with Formula 1 coverage – but disappointingly cold and forbidding.

One thing you can always count on with Jenkinson, though, is that whatever he does next will sound little like whatever he did last. Here’s hoping he relocates his bass and his sense of humour next time around. 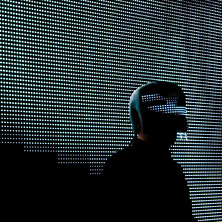