Hip hop has always had a dodgy relationship with California. Though the genre was created in New York, its most lasting by-product, gangsta rap, was created out West. So it’s baffling when its next great MC will supposedly put Cali “back on the map”.

It seems Compton rapper Kendrick Lamar isn’t concerned with such pressure. His 2011 album, Section.80, was a rousing success with the underground and mainstream alike. Before then, the young artist had released a series of mixtapes, which helped him generate a significant buzz for his abilities as a storyteller and technical lyricist.

Surely, Lamar is a proud California native, but this major label debut harbours more Southern ethos than West Coast gloss. As it plays, it’s clear that Lamar wants to fill the pondering void once occupied by OutKast rapper André 3000, whose philosophical rhymes made him one of hip hop’s most admired MCs. This voluminous album is driven by wandering rumination and layered compositions, resembling OutKast’s landmark Aquemini album.

It takes a few playbacks to fully absorb its intensity. Lamar layers it with diverse flows that provide insight into his textured childhood. So while the Golden State has a new king, Lamar isn’t boxing himself into fixed parameters. He reaches beyond his home state for a broader sound, and the results are remarkable.

As the title suggests, good kid, m.A.A.d. city is a conflicted tale about Lamar’s Compton upbringing. There’s the mischievous Lamar, who takes his mum’s van to have a tryst with Sherane, pillages a home with his friends (The Art of Peer Pressure), and goes on a bender (Swimming Pools). And as the album progresses, Lamar uses those tough times to foster his maturation.

On Sing About Me, he uses simple drum taps and acoustic guitar to honour lost acquaintances. By the song’s moving second half, titled I’m Dying of Thirst, Lamar laments black-on-black violence with a renewed spirit: “Tired of running, tired of hunting, my own kind, but retiring nothing.”

The next track, Real, is about love of self. Supplanted by parental advice (via voicemail), Lamar moves from a sullen past to brighter days. At good kid’s conclusion, Lamar’s transformation is apparent: he’s still growing up and ready to take his place among the hip hop elite.

Now if he could just return his mum’s van. 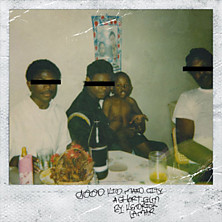