If you've got friends who claim not to like Dylan, play them this. If they don't like...

By 1975 it was the best of times, it was the worst of times. With a cracking return to form album (Blood On The Tracks) under his belt and a triumphant tour with the Band completed, Robert Zimmerman had reclaimed his place as the acerbic crown prince of rock. Yet all was not rosy. As fans already knew, Blood...was a very personal exhumation of the troubles affecting his marriage and, at 34, it looked as if Dylan was careening into a very early mid-life crisis. What to do? Why, hit the road with a circus-style troupe of friends, old lovers and diverse musicians; play in small venues and fill the gaps between shows with improvised (and filmed) surrealism, of course. Oh, and paint your face white. Welcome to Bob Dylan's Rolling Thunder Tour.

Until now the tour (which kept rolling well into the following year) has only been documented by the almost biblical intensity of Hard Rain. This fifth addition to the ongoing 'Bootleg series' cherry-picks some magical moments from the tour's opening months at the end of '75. Drawing on a core of musicians from the Desire sessions along with notable additions such as Joan Baez, Joni Mitchell, Roger McGuinn, Bobby Neuwirth, Ramblin' Jack Elliott and even ex-Spider From Mars Mick Ronson, Dylan is in revelatory form.

From the opening bars of ''Tonight I'll Be Staying Here With You'' the energy strips away any fears that any Zim-like inscrutability will obscure the songs. ''Throw my ticket out the window! Throw my mattress out there too!!'' declaims Bob. Forget the down-home simplicity of Nashville Skyline, this song is now a raging, lusty broadside. The band are fabulously tight considering Bob's habit of changing...well anything from tempo to lyrics. Scarlet Rivera's violin and David Mansfield's pedal steel add glittering nuances and ''It Ain't Me Babe'' and ''Mr Tambourine Man'' get re-tooled into sleeker, more contemporary forms, losing nothing of their original impact.

Meanwhile disc two's selection of down-tempo numbers (''Love Minus Zero'', ''Tangled Up In Blue'' etc.) is beautifully pitched. Dylan's joyous performance in such intimate venues shines out in a puckish ability to rewrite lyrics on the hoof and also (gasp) talk and joke with his audience and band. There's the impassioned appeal for Ruben 'Hurricane' Carter's release (the tour was an ongoing vehicle for pleading his innocence) but also a fair slice of Bob-style jocularity. ''Play a protest song!'' shouts one punter. ''OK, here's one for ya'' drawls Bobby. And then launches into the rolling lament ''Oh, Sister''. Trés droll.

Add a wonderful essay, by tour diarist Larry 'Ratso' Sloman and some of the best photos of Dylan, ever, and you've got a package that's as good an argument for the ongoing canonisation of Bob as any so far. If you've got friends who claim not to like Dylan, play them this. If they don't like it, check their pulse. 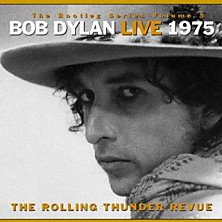