Bloc Party A Weekend In The City Review

Much of what made the band’s 2005 debut so successful is still there but the content...

Produced by Jacknife Lee, A Weekend In The City sees Bloc Party attempt to translate an honest assessment of the beats of metropolitan modern life – drink, sex, drugs and violence – into a digestible record. Much of what made the band’s 2005 debut Silent Alarm so successful is still there but the content is darker and the impact less immediate. This is a tough one to call.

“Song For Clay” verges on being the perfect opener, easily bridging the gap between the two albums with a typically rousing chorus. Momentum established, it is then carried with aplomb by “Hunting For Witches” and the exhilarating first single “The Prayer”, which has every ebb and flow in the right place at the right time. Okereke’s masterplan to use upbeat tempos to transmit downbeat content works and is utterly engaging. Wait a minute, it’s only February and the album of the year gongs are being dished out without hesitation...or so you think.

Six tracks in and A Weekend In The City starts to fray at the edges. Close inspection of the lyrics show flaws and the music mood dips, giving the difficult subject matter too much time to dominate proceedings. “On” – a song about cocaine - and “I Still Remember” will deservedly garner
praise, but are in danger of being lost in the record’s slower-paced second half, and the nauseating “Sunday” is a timely reminder to hover over the back button with intent.

The intensity of the album and its lyrics will be cause for debate. Some will appreciate Kele’s openness and revel in his philosophical focus on modern lives, and the way people are wasting theirs, others will be too distracted by questionable content such as ‘East London is a vampire/It sucks the joy right out of me,’and lines about sudoku to take Okereke’s grumbles into consideration. Disillusion and disdain resonate frequently, and it does becomes draining.

But wait, isn’t it a grower? Yes, in every sense, but not always to its advantage. A Weekend In The City is a tale of two halves. The strong start to the album continues to amass appeal with each listen whilst the weaker latter stages become more and more stranded.

This sophomore effort has enough merits to eek away from the looming shadow of Silent Alarm and signal a new era for Bloc Party. However, their defining album it isn’t and the moments of early brilliance are tinged with disappointment. 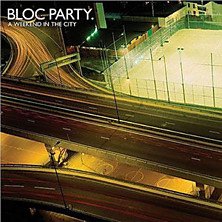