Pioneering stuff from the dawn of electronica courtesy of the genius of the...

The Radiophonic Workshop was set up by the BBC's Drama department in the late 50s as a forum for the creation of what were initially termed 'Electrophonic' sounds to accompany specialist radio and TV productions. Most famed for Delia Derbyshire's electronic realisation of the Dr Who Theme, in its early days the Workshop was a hive of fervent sonic experimentation to rival IRCAM or any European electronic music studio (though with slightly different concerns and a considerably larger audience), tillcutbacks killed it off in the late 1996.

This CD is more or less a reissue of the Workshop's 10th anniversary album from 1968, designed to showcase non Dr Who related pieces and featuring work from three of its leading lights, Delia Derbyshire, David Cain and John Baker.

In the dark days before sampling, MIDI and polyphonic synthesis, electronic music was created by incredibly hard and time consuming graft with tape, scissors and primitive tone generators (the Workshop didn't get a synthesizer till 1965). With these constraints it's a source of wonder that the Radiophonicians managed to extract anything but the usual avant garde burble n' squeak, but the music here is anything but...

Obviously, these were composers working to a brief and often treated as glorified technicians by programme makers (hence the cheesiness often on show), but Cain and Baker's skilful, zippy themes are a huge amount of fun to listen to. Likewise their more abstract pieces; Cain's "War of the Worlds" will terrify your cat, and Baker's "Structures" is an impressive slice of gently unsettling atmospherics.

"New Worlds" will strike chords with listeners of a certain age, as its closing bars were used as the signoff to John Craven's Newsround, and if Baker's spot for Tomorrow's World doesn't conjure up a future where we all wake up to breakfast prepared by a robot before flying to work with the aid of a jet powered backpack, then shame on you.

Still, there are moments where the music transcends its origins and demands a life of its own. Most of these are provided by Derbyshire, whose work still startles; "Pot Au Feu" is angular robot jazz crammed with incident; "Blue Veils and Golden Sands" is isolationist ambience some 25 years ahead of its time. The killer though is "Ziwzih Ziwzih OO-OO-OO" (composed for a sci-fi play based on an Isaac Asimov story). Based around backwards voices, the tones of the Wobbulator (a modified test tone generator) and riding on a riff that sounds suspiciously like Missy Eliot's "Get Ur Freak On", it sounds like nothing else; insanely catchy yet deeply sinister. Lovely.

An essential album for analogue fetishists and TV theme obsessives, plus a must for anyone vaguely interested in the origins of contemporary electronica, BBC Radiophonic Music is a fitting testament to one of the UK's most valuable and eccentric institutions. Oscillate wildly! 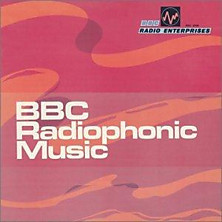