The piano-and-sax duo musters an unforced alchemy on this fine collaboration.

Many saxophone-piano duets inevitably invite comparison with singer-piano collaborations insofar as the keyboard serves as a harmonic bed for the reed or voice. The piano underpins the horn’s melodic line with chords and occasionally breaks out with a solo. The horn rarely plays a supporting, ‘comping’ role. Of course exceptions to the rule exist, and most recently some adventurous duets by Jason Yarde and Andrew McCormack and Rudresh Mahanthappa and Vijay Iyer have shown how fruitful a subversion of the usual model can well be.

This engrossing union of pianist Matthew Shipp and alto saxophonist Darius Jones is an important addition to the aforementioned and fascinates for its emotional and conceptual richness. Fifty-year-old Shipp, an essential presence on the New York scene for some 30 years who has had lengthy associations with saxophonist David Ware and bassist William Parker, is a conspicuously powerful player. He often favours boulder-like, bassy chords which sometimes contain so many notes that they become towering, veritable Himalayas of sound. These dense low-end onslaughts contrast effectively with the piercing fortissimos of the talented 32-year-old Jones, a player who impresses in the ironically named Little Women, a band probing noise-laden thrash jazz. Hence several pieces on this 13-track programme engage for their wide dynamic range, with the keyboard crashing down into baritone territory while the horn detonates into the soprano.

But there is much more to the collaboration than this kind of tonal bi-polarity. A gripping, stately composition such as Nix Utoan opens with stark Pharoah Sanders-like overtones that then seamlessly wheel into a bumpy carousel of short, stabbing lines from Shipp and Jones; and it is the well-handled tension between different three- or four-note phrases, falling both on and off an implied beat, that pricks the ear. Such rhythmic clashes have marked jazz for decades, but the impact is heightened by their clarity in this denuded, drummer-less setting and the bold percussion of each man’s lines. They both lock into a game of convergence and divergence that succeeds for their forceful individuality and unforced alchemy. 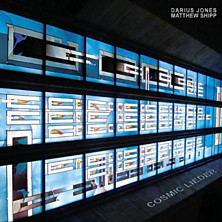