Incorporating elements of rock‘n’roll's past it's still a very modern affair.

Put aside all thoughts of imminent backlash immediately, as Humbug is Arctic Monkeys’ most enjoyably complete album to date.

Recorded in part with Queens of the Stone Age’s Josh Homme in the Californian desert, while it lacks the hook-laden immediacy of previous collections, Humbug embraces the true nature of album-craft by sequencing ten tracks in such a way that coherence and consistency bind constituent pieces into a single, enjoyably sombre whole.

Melancholic overtones permeate even the brightest Alex Turner lyricism. His voice is heavier than before, confident that songs about popping down the local corner shop and asking a girl out aren’t guaranteed to maintain the group’s success. A wise move, especially as said approach has been reduced to cliché by pale imitators.

Homme’s presence is felt in the solid, rugged mix, yet stoner vibes are conspicuous by their absence, nary a waft of weed smoke manifesting itself aurally. As for the reported Hendrix and Cream influences: while the band is indulging in a depth of sound previously unplumbed, songs remain loaded with a mischievous, at times malevolent energy.

Penultimate track Pretty Visitors is particularly unsettling: “What came first, the chicken or the d*******?” spits Turner, as Circus of Horrors organs are split asunder by some truly tumultuous drumming from Matt Helders. It’s one of many indicators on Humbug that Arctic Monkeys are actively moving away from the sound that launched a hundred would-be acts in their wake. Kitchen-sink poetry’s replaced by rampant analogies, characters of the everyday transformed into otherworldly denizens with wicked intentions.

Turner still spills syllables rather too swiftly at times – Secret Door would benefit from a little lexical restraint – but largely a slow-and-steady approach prevails, mirrored by the music’s assured shuffle. Fire and the Thud is a good example of the band’s sprightly past tempered by their present penchant for laid-back, blues-touched riffs. Lead single Crying Lightning also showcases a newfound swagger – less raw-knuckled front, more funk-kissed fuzz-bass serving as the backbone for some delightful fret wandering.

If there’s one fact to be presented through all this subjectivity, it’s that Arctic Monkeys have grown up: here, they incorporate elements of rock‘n’roll past to fuel a very modern affair, and that it manages to sound completely unique is testament indeed to Turner and company’s cultivated creative nous. 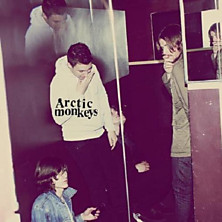