Sons And Daughters This Gift Review

A sparky and polished offering from the Scottish quartet.

When Sons & Daughters bounded onto the indie scene back in 2003, there was one thing we were sure of - they were Scottish. Conceived in Glasgow during an Arab Strap tour, Adele, David, Ailldh and Scott were in fact, (until Amy McDonald), the most Scottish thing we'd ever heard.

Their footstamping drums made 2nd album "The Repulsion Box" one of the strongest albums of 2005 and now they're back, this time with Bernard Butler taking over production duties, his distinctive melodramatic style often breathing a new sweeter sound into Adele's vitriolic vocals. As motown drumbeats and Spector-esque styles may embellish songs like 'The Nest' - have no fear, the melancholy remains as we hear 'everything that happened here, could have happened when you're dead.'

Epic title track 'This Gift' has none of the claustrophic darkness of 'Dance Me In' but all of the force, filled with macabre howls that somehow sound like The Shangri-las indulging in a party with Elastica round Frank N Furter's house. And if you were a fan of Adele and David's lovers banter, last heard on the devasting 'Rama Lama', they're back with an altogether chirper duet on 'Chains'.

"This Gift" may sound like a more styled and polished 'Sons & Daughters' but as 2nd single 'Darling' and it's narky reworking of a beat not dissimilar to "Town Called Malice" proves, they've lost none of their spark, their drama and their ability to bore a dark hole in your soul. 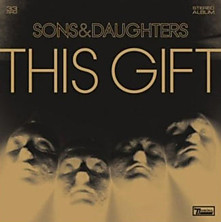