Polinski – sadly not named after Gus Polinski, John Candy’s character in Home Alone – is the work of Paul Wolinski, who has truncated his name and briefly stepped aside from his regular job with 65daysofstatic.

Unsurprisingly, this solo album shares a huge chunk of its vision with 65daysofstatic’s: brooding, glitchy instrumentals take shape, blurring the line between rock, metal and dance. However, this project enables Wolinski to shake free of the shackles of being in a band, and you can tell that he is relishing the opportunity to push ever further into electronic terrain. Huge beats burst out of nowhere; trance keyboards turn the tone euphoric; rhythms stop dead, twist 180 degrees then start up again. At times – have a listen to Still Looking – the effect is dizzying, and not far removed from one of Skrillex’s remixes.

It all sounds like a rave on a far-off planet, where robotic doppelgangers of French duo Justice, their wiring screwed, are behind the decks. A party to mark the end of the world. The lack of organic input – even the ‘vocals’ in Stitches and the 11-minute monolith Kressyda sound computer-generated – lends the whole thing an otherworldly, futuristic atmosphere. The fantastic video for Stitches, meanwhile, betrays a love of old-school video game adventures, and you can hear that influence in the music: both in the bleeps and beeps, and also the sense that Labyrinths is trying to tell a story, albeit obliquely.

This is an enveloping, urgent listen, shaped by an intelligent musician. Well aware that electronica can drag if too repetitive and one-dimensional, Wolinski never leaves you waiting for too long before switching direction, and he peppers the music with massive, crowd-pleasing synth melodies – opener 1985-Quest leaves you in little doubt that Labyrinths will be a thrilling ride. At the album’s core beats a pop heart that should draw a large audience. Going back to the day job might be tough after this. 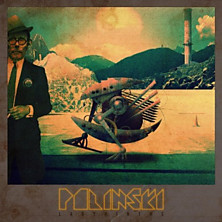