There had been considerable tumult in the Banshees' camp between the release of 1982's A Kiss In The Dreamhouse and 1984's Hyaena. Guitarist John McGeogh had been sacked; Robert Smith had replaced him on a long-term loan, and after a year of group solo projects (The Creatures and The Glove), Smith wanted to mark his time in the studio with Siouxsie. The resulting single (here as a bonus track), Dear Prudence, became their biggest UK hit in late 1983.

Hyaena, the sole studio album this line-up recorded together, was released in 1984, just after Smith had left to return to the Cure full time.It is swirling, complex and frequently enchanting.

Traditionally an album that has split the audience, it bridges the gap between the raga-like material on JuJu and their later, high-gothic period. The lyrics are suitably bleak – 'a dead sea of fluid mercury' (Dazzle); 'from the fury pit, a reek of misery' (Pointing Bone); 'eat me, feed me, with your belching, foul breath' (We Hunger) - and ably demonstrate the underbelly of pop at the time of Wham! and Nik Kershaw.

With Budgie and Steve Severin playing like their life depended on it, and Siouxsie enchanting with the appropriate air of need and detached drama. It is the Banshees psychedelia running riot. There are sufficient theatrics and spills that make it akin to a thriller hanging on its final twist.

This new remaster, bonus material and suitably ornate notes from Paul Morley make this another exemplary addition to Banshees' reissue series, demonstrating the regard in which they still hold their audience. 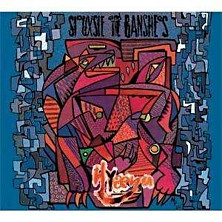