The title refers to a series of abstract paintings (entitled 858-1 to 858-8, all oil on aluminium) by German artist Gerhard Richter. Commissioned by producer David Breskin, Bill Frisell used the paintings as stimuli for the eight compositions here. The 858 Quartet - Frisell plus long-term associates Hank Roberts on cello, Eyvind Kang on viola & Jenny Scheinman on violin, was put together in 2002 to record this music and has remained active since, last year appearing on Frisell's Unspeakable album and then touring the States together.

After a minute or so of uncompromising free-form cacophony that will potentially alienate many listeners, the album's opening piece "858-1" develops into a hauntingly mournful melody, as beautiful as anything Frisell has written. The piece also establishes the overall modus operandi, with collective playing dominant and very little space available for individual solo voices; Frisell himself rarely takes the spotlight apart from an occasional attention-grabbing electronic intrusion.

Although consisting of eight distinct pieces, each somehow relating to a particular picture, the music is clearly designed to be heard as a totality; overall, it conveys surprisingly well the feel of the pictures. Despite the inclusion of the occasional folksy melody, as on "858-7", the music has a distanced formality that reflects the somewhat chilly atmosphere of the paintings.

For fans of Frisell's post-Nashville, cosy, countrified music, this album will feel like jumping naked into icy water - not comfortable, but very exhilarating...and maybe not to be repeated too often. Older fans will be gratified that Frisell still has his cutting edge when needed; he's as sharp as ever.

As well as being playable as an ordinary CD, the music can be experienced as the soundtrack to an included CD-ROM of Richters paintings. Useful as it is to see the paintings that stimulated the music, I found this CD-ROM too confining and narrowly literal; highlighting particular details of the paintings to accompany certain passages of the music, it encourages an oversimplified interpretation of the creative process. Indeed, in his sleeve notes, Frisell goes to considerable length to dispel just this sort of oversimplification. But why does this feel like a glimpse of the future? In twenty years time, will all recorded music have accompanying visuals?

For most other players, a project such as this would be an interesting side alley, a diversion from their mainstream work. With Frisell, there is no mainstream work; every project is a new departure. One expects the unexpected - a world music sextet follows a country trio, follows a heavyweight jazz trio. Richter 858 slips seamlessly into the sequence; distinctly different and distinctively Frisell. 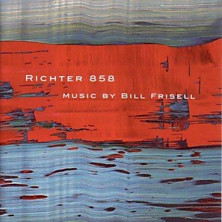